I BET $200 TO SCORE AGAINST NIGERIA 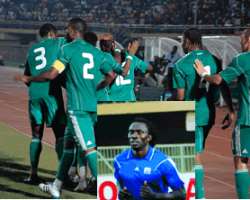 Scorer of Sierra Leone's lone goal in last week's international friendly match with Nigeria, Mohammed Kalia, was on cloud nine moments after the encounter for scoring in his debut for his national team against the highly-rated Super Eagles of Nigeria.

The Stade Tunisien FC forward, who came off the bench to score a brilliant goal in the 87th minute, thereby reducing the scores to a respectable 2-1 against his country, revealed to Saturday Sunsports in an exclusive chat that he staked $200 as bet with his coach with a vow to score against the Super Eagles in Lagos.

'I'm not happy we lost to Super Eagles, but I'm happy to have scored in my debut for my national team against a big team like Nigeria's Super Eagles where you have a lot of experienced players,' he began moments after the international friendly match at the Teslim Balogun Stadium in Lagos.

'It's so nice coming from the bench to score for my country. I told my coach that I would score against Nigeria and I staked $200 as bet for that. I prayed for the chance, and when it came, I made the most of it,' he relished.

'We have the capacity to beat Nigeria, but we accept the result all the same. It's a good match for us because very soon, we shall play against Niger Republic in a Nations Cup qualifier.

'We are grateful to Nigeria for the friendly match because it's a good preparation for us for the tasks ahead,' the Stade Tunisien hit man said.

Asked why he sounded so confident that Sierra Leone could beat Nigeria despite the Super Eagles' pedigree, Kalia replied: 'I always have respect for my opponents. Nigeria is a big team and we respect them. But I have my own ability and I needed to make the difference.

'In Africa, Nigeria is one of the best football playing nations, everybody knows that. I'm very happy to have played against the Super Eagles because Nigeria is bigger than Sierra Leone in every aspect. Though football is not all about big names. It's a practical thing. You have to show what you can do like I did when I was introduced in the match,' the Leone Stars striker explained.

Kalia sensationally rated Sivasspor of Turkey forward, Michael Eneramo, as Nigeria's best striker and wondered why Coach Samson Siasia did not invite the former Esperance of Tunisia gangling striker for the match.

'My best Nigerian player is Michael Eneramo. But I'm surprised that he was not invited for the match. Both of us played in the Tunisian League. I play for Stade Tunisien, while he (Eneramo) used to play for Esperance before he moved to Turkey recently.

'I have 100 per cent respect for him because he's a very good striker. I also respect Joseph Yobo, the Eagles' captain,' the strong-built striker confessed.