EGYPTIAN LIBERATION: THE TRIUMPH OF HUMAN WILL AND DIGNITY 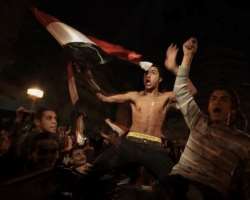 Hosni Mubarak 82, resigned and Power transferred to Egyptian military and Switzerland has frozen the Swiss bank account and assets of Hosni Mubarak. The victory and accolades belong to the people of Egypt - youths, young and the old did not rest nor sleep until Hosni Mubarak, the 30 years Egyptian dictator bowed down from power. The streets and air of Cairo and Egypt have been filled with euphoria, ecstatic and thunderous joy as they celebrate the departure of Mubarak. As Egyptians demanded his departure, out of omission or commission Mubarak read the tea leaf upside down and chose to bury his face in the sand. He went on state run television and told the desperate Egyptians that he will continue to be their president.

The people of Egypt could not take that anymore and they marched in large masses to the presidential palace peacefully and the next day Mubarak turned in his resignation letter to his appointed vice-president Omar Suleiman. Hosni Mubarak’s autocratic and dictatorial leadership has been the order of the day in his country for almost thirty years; he has managed successfully to suppress democratic impulse and instinct for a long time. Mubarak was able to convince the civilized world that without his presence and control that the Islamic radicals who were lurking at the corner will take over reigns of power. On this cultivated gamesmanship as custodian of stability, he assumed the cloak of inevitability as he was seen as a stabilizing force in his region.

A New day and beginning of a long journey
The people of Egypt needs and deserves their moment in the sun, they have made a history by driving out a dictator by themselves without any interference or help from outside. It was a great achievement indeed by any standard, with almost a velvet revolution a strongman of the land was made to give up power. The forces of change coupled with human will and dignity were too much to be marched by crude forces of brutality and darkness emitted by Mubarak regime. Hosni Mubarak did not govern alone, with the support of his henchmen, secret police and military he overwhelmed his people with fear, credible threats and intimidation. The remnant of his leadership has not disappeared completely but the military have as well understood and have experienced the power of the common people. The military during the 18 days of the uprising was behaving responsibly and have respected the rights of the people to assemble and to march peacefully. And for this they deserved to be applauded for being the custodian of stability in Egypt. But the military by nature of their training are not competent to rule but to defend a nation.

Egyptian people must understand that the driving away of the dictator was an opening door to a long journey to democratic dispensation. Egyptians maybe in quick need of calling for an election, which is a good thing but election is not tantamount to democracy rather a building block to a democratic dispensation. A constitution is needed as a compass to democracy and rule of law. A secular constitution to be written that respects the fundamental human rights to speak freely and to gather freely without interference. Constitution that guarantees minority and religious rights is the core rudimentary of a prosperous democracy.