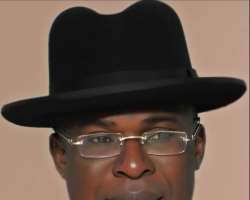 Chief Timipre Sylva is one of the 36 governors who are seeking re-election in April. With a about eight weeks away from the ballot, many stakeholders in Bayelsa and the Diaspora have a faint picture of what he stands for, what has done within the last four years and what he intends to do, if per happenstance he gets another mandate.

A friend of the governor says Chief Sylva is nice man. He is charismatic, handsome, an orator in the mould of Obama and means well for Bayelsa. But he also added that Sylva is surprised that Bayelsans believe what he promises when in actual fact, he does not believe that he can deliver on his political promises. In his praise of Timipre Sylva, his friend continued with a touch of finality that the man suffers from what Americans call T-MIS. What is T-MIS, this reporter queried? Well, T-MIS, my friend said, is ‘Too Many Ideas Syndrome’.

Give Sylva a chance to speak to the people for a few minutes and he will attempt to convince them that he hopes to truly turn Bayelsa into an Eldorado. But the truth is that he is inflicted with too-many-ideas-syndrome with no known cure worldwide. Non implementation of multifarious projects in the last four years has become his undoing in government. This is because Sylva, with a policy detached and separate from yearnings and interest of Bayelsans, has an assemblage of parasites and plunderers in government. And with a body of men, holding themselves accountable to nobody, anything can happen in the state, if the electorate makes the grievous mistake of casting votes for a drowning governor, apologies to Chief Timi Alaibe, who is waiting in the wings to take over from the man who has put a pin thorugh his own political balloon.

After four years in the saddle, Sylva now poses a disturbing threat to the development of Bayelsa. To make the point crystal, let us penetrate the fog of time and obliquity to see the damage Sylva has done in Bayelsa, so that the story would not sound like tales by moonlight.

After inauguration day in 2007, Sylva wasted no time in swinging into his destructive action. He sent bulldozers to work at Azikoro road, Ekeki Yenagoa in the name of expansion. Houses and stores were destroyed but since it was done for the good of the people, the affected traders and landlords held their breath and waited for compensation from government. But till this day, the people are expecting reparation and waiting on the governor to come back to his senses and re-construct the road. Why destroy, when you can’t rebuild! There were more surprises up the sleeves of the governor.

Not long after that, the governor said he would create a central business district in Yenagoa. It was a bright idea but implementation is still glued to the starting block, after over N5 billion naira has gone down the drain for clearing and land preparation. In the same vein, the governor promised to construct 7,000 housing units at Ekeki Housing Estate, Phase II. His uncle’s firm, Gefesco International Limited, was awarded N3billion contract for the clearing of the site. The job was haphazardly done and after one year, there was another round of clearing and money was paid out again. It has become a perennial contract for swelling the bank account of the company.

Sylva told Bayelsans, time and again, that education remains a cardinal point in his administration’s policy. He promised to build model secondary schools in all the senatorial districts in the State. Parents who have primed their children to benefit from Sylva’s illusionary dreams have waited in vain. The teachers and staff of the Bayelsa State College of Arts and Science have been on forced vacation for almost three years. Although their monthly emoluments are paid by government, an idle mind is the devils workshop. He told the bewildered staff of the school that we do not need a remedial school in a disadvantage state like ours. Instead, to boost the profile of his community, Sylva created a college of education two years ago which is yet to take off. What a colossal waste and a scroll of unfulfilled promises.

Not tired of betraying his word, Sylva said he was going to turn Epie Creek into a fish farm and approved N3.5billion to consultants for the project. He said Bayelsa would produce 5million table fish for Nigeria. The commissioner of Agriculture who has razor-dazzle zeal to pursue unsound ideas seized the opportunity to enrich himself and the governor’s cronies. A whooping N7billion went down the drain. Not done, the governor went ahead and established a spurious N1.5 billion fish farm in front of the Okaka Housing Estate. That place would best have served as a recreation centre for residents and children in the estate. The fish farm is now sanctuary for frogs and other reptiles.

Looking at the unfulfilled promised, Sylva led government would submit itself to history as a do-nothing government, if doing something means continuing that programme of deceit and corrupt that has dominated Bayelsa in the last four years. Or how else do we explain the Musa Yar’Adua Cargo Airport project. One of my brothers sarcastically said that the proposed airport is an amphibious one. During the rainy season, the flood water almost gets close to the East West road and commuters say they intend to advise Timipre Sylva to turn the project to a sea port. In the dry sea, it can become a cargo airport, if it pleases the idiosyncrasies of the loud mouthed governor. A government spokesman said only N10billion has been spent on this elephant project. No wonder Mr. Mike Igini, resident electoral commissioner for Cross Rivers State once described Bayelsa as a failed state.

Some of the un-accomplished projects include suspension bridge, the rail link to Port Harcourt, the super tunnel at Epie Creek, Bayelsa Oil Palm project, Riverine Transport Services, the Yenagoa Marina, the notorious 53 inner roads, the 500 bed hospital, the Rice project, the Fishing Trawler and Company, oh gosh, I have lot count.

Let us bestow some thoughts on the inner roads’ project in Yenagoa. When President Goodluck Jonathan visited Plateau State, last year, he commissioned three roads projects completed by Governor Jonah Jang, in spite of the lean resources of the state. The first road project inaugurated was 26 kilometres, the second 56 and the last 35 kilometres. Roads construction anywhere is calculated in kilometres to be able to ascertain the amount it has gulped. The government should tell Bayelsans how many kilometres of inner roads has the Sylva led-administration built? All put together, the so-called 53 roads is not up to 36 kilometres. How much has been spent, nobody knows but there is a lot of noise about these roads. How many new roads do we have elsewhere apart from Yenagoa? Where are the senatorial roads he promised? What a shame!

Bayelsans are acutely aware that Timipre Sylva has dozens of unaccounted bank loans linked to spurious projects. As we move towards the election, the governor is haunted by two ghosts, first corruption and second, failed electoral promises. As an incumbent, he was expected to have advantage over other candidates. However, because of his dismal performance, he has electoral inferiority complex and become a prisoner of his own political illusions in an era of one man, one vote.

With the sharpness of the frustration of the electorate, the people of Bayelsa are ready to dump the PDP and vote for a more credible candidate; an alternative to drift of Sylva-led administration which is heading to it own distorted wonderland.

Fungeowei Bekes is a political analyst in Yenagoa.