EZECHUKWU: THE PERILS OF SPECULATION AS EVIDENCE 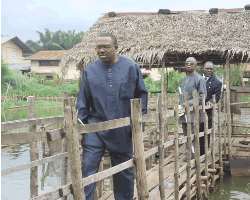 The Capital Matter0s column of Monday February 7, 2011 was entitled Now, the swindle! (1). At the ordinary level, the article seems like a lamentation on the unenviable lot of Ndigbo in the Nigerian nation. But a perceptive reading of it can only put it forward for what it is: a jeremiad on the resolute support of Governor Peter Obi and the broad swath of Ndigbo for Dr. Goodluck Jonathan's presidential bid.

The entire piece drips with bile, the globules of which are clearly visible around every word and phrase of the text. It is a study in the manipulation of associated emotions and negative imagistic registers - threnody, tremulous lips, swollen eyelids, the grief-broken voice, etc. It is a tirade from the megaphone of monarchies confronted by the irreversible realization of their inability to continue to clutch their goblets. But the pointed, metallic end of the lance since sped past, leaving only its wooden shaft trembling. The effluvia and the hurling of missiles to antipodal zones will continue in the domain of those unable or unwilling to come to terms with the inevitable.

A number of the points raised in the article should briefly be touched, if only to remind the blessed readers of Daily Sun that, contrary to the position insistently forced on the populace by people who claim to know all the answers, there are at least two sides to every coin. When someone projects apocalypse for Ndigbo on the mere strength of a Federal appointment offered to Mrs. Bianca Ojukwu, it raises the pertinent question of whether or not they are conversant with Igbo history. The gravitas of the Igbo individual, the antecedents and resilience of Ndigbo in general, and their faith were not as much as smothered by the conflagration that attended Biafra. How then can their essence and existence come to grief on account of a job whose most enduring character is transience?

Olusegun Obasanjo, as President of Nigeria, did make a good number of appointments that are in the same league as the one now said to be imbued with the innate quality of compromising the dignity, integrity, mien, comportment and even the soul of Ndigbo. Obasanjo appointed the children of prominent Yoruba leaders like Chiefs Obafemi Awolowo, Ladoke Akintola and Abraham Adesanya to ambassadorial and ministerial positions without the Yoruba being the worse for it.

He appointed the eldest daughter of Professor Wole Soyinka, the grandson of Chief Awolowo and many such people with parental or political pedigree without raising eyebrows. But because Bianca Ojukwu got an SSA's job, Igbo towns like Abatete, Amansee, Amanuke, Amawbia and Amesi will be incinerated!

Free God's people, please!
If Capital Matters spoke with certainty on a given matter, it will posit no serious challenge responding to it. But when the conjectural takes centre stage, the din of silence could be appropriate repartee.  'A few months ago, the Presidency was said to have approached the ex-Biafran leader…' 'Rather, the more generalized impression seems to be that…' 'There are those who are arguing that President Jonathan might have…' When an article is littered with equivocations and suppositions such as appear immediately above, readers must put on the armour of caution.

If people must know, the information at Government House, Awka, is that, following the conclusion of the voter registration exercise, Mrs. Ojukwu jetted into the country to organize the return of her children to school. It is understood that she since winged her way back to the UK and her dear husband's bedside. As for the place of APGA in the national scheme of partisan politics, I advise that it is wrongheaded to count one's chicken before they are hatched. It is against the grain of rationale to prize one student ahead of another when there are no scientific indices for such an assessment.

The correct procedure is to first subject both candidates to an examination. You cannot sound APGA's death knell when the indicators for such a grave conclusion are not at your fingertips. Would all those prominent and not-so-prominent politicians that flooded into APGA in recent times have boarded a sinking ship? Why should people begin to dance ahead of the sound of music? What if they danced themselves lame? What would they do when all others are on the dance floor executing practiced dance steps and gyrating their hips to pulsating rhythms?

In one word, why not wait for the general elections, the real barometer for measuring the strength of parties, before saying that Party A is dead or Party B is alive and kicking? At the last word, do all the cries for APGA not amount to crocodile tears, coming, as they do, from a non member, and one at that, who has never been known to contribute as much as a single kobo to the coffers of the party?