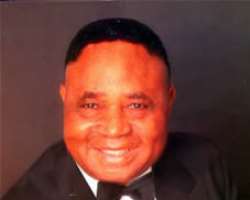 The Esama of Benin Kingdom, Gabriel Osawaru Igbinedion, and one Collins Iginidu have been dragged before a Benin High Court by his son-in-law, Prince Avan Akenzua 11, over an alleged illegal breaking and entry into his house and removal of property worth millions of naira.

The plaintiff, in a five-paragragh statement of claim, is urging the court to order the defendants, their servants, agents, and privies to return his safe, jewelries of inestimable value, including coral beads, diamond, gold and artifacts.

Akenzua is also praying the court to direct the defendants to refund the sums of 200,000 pounds sterling and N9,672,000.00 to him. Furthermore, he is praying for the return of his certificates, including WAEC, university degree, NYSC and original copies of Certificates of Occupancy of land as well as demanding for payment of N500m as general damages for what he described as grave embarrassment, trauma and humiliation.

When the case up for hearing at the weekend, counsel to Chief Igbinedion, Mr. Dan Okoh, informed the court that he had filed notice of extension of time as he was recently briefed on the case, urging the court to give him seven days to file his statement of defence. But counsel to the plaintiff, Mr. Pedro Egharevba, while not opposing his application, said the defence counsel must conform to the time frame and demanded for cost.

The trial Judge, Justice Alero Eruaga, urged the defendant's counsel to file his statement of defence within seven days and awarded a N1000.00 cost against the defendant. Meanwhile the plaintiff is also seeking the dissolution of the marriage contracted between himself and the Igbinedion's daughter, Omosede Gabriella Igbinedion-Akenzua on September 13, 2008, in Benin- City.

The plaintiff in a petition filed at the High Court of the Federal Capital Territory Abuja by his counsel, Alexander Oketa of Festus Keyamo Chambers, is seeking the dissolution of the marriage on ground of cruelty on the part of the respondent and that the marriage had broken down irretrievably, due to desertion for at least one year.

Plaintiff also sought the court's order to take possession of the only single male child of the marriage, Prince Avan Amafidon Akenzua 11 at the age of nine, so as to bring him up in a godly way.