A WOMAN SHOULDN'T DEPEND ON HER HUSBAND FOR EVERYTHING - AITY 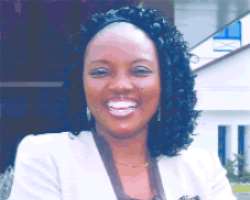 Aity
You may never have met her physically but somehow you get the feeling you've known her all your life. Friendly, personable and with an award winning smile, Aity Dennis Inyang, is a gospel artiste and wife of Pastor Dennis Inyang. Unknown to many, she is a Do-It-Yourself mama, all thanks to her mama, Mrs. Comfort Ekpenyong.

Of course 'mama' (as she fondly calls her mum) taught her so much to make her who she is today, but a certain saying of hers made a big impression and has never left her. Her mother said: 'No matter how beautiful a woman is, or how much in love she is, she should never be a liability to her husband.'

Being the first of six siblings, four girls and two boys, it was only automatic that she got first hand nurture and culture (which she calls schooling) from mama.

Here, she reminisces on growing up under the tutelage of her D-I-Y Mom.

Mama was trained by Europeans
Mama - that's what I call her but my siblings call her mum, and I say they are the new generation children (laughter) - was trained by the whites. It was from them that she got her training as a nurse. So you can imagine, she learnt everything - knitting, crocheting, baking, sewing, and so many other things. And she taught us all these as we grew up. In fact my sister and I learnt how to sew from her such that when I was in the university I sewed my clothes by myself.

Then I'd use razor to cut the material and sew, my sister did the same. In fact she does that as her business now in the United States. We never went out to learn sewing from anyone. And because of her training from the whites, she was impeccable and required same from us like cooking, even serving it. If she asked you to set the table, you just had to do it to the letter. And I'm trying to do that with my nine-year old daughter. I always ask her to set the table, and she would ask if it was 'swallow' or not so that she can set accordingly.

Do-it-yourself mum
When I was in the university, I hardly went to the salon because my mum had everything one needed to make hair. She had rollers, curling tongs, hand drier etc. and I had very long hair then. So I'd often use her rollers, the drier or the stretching comb. So I can do all that by myself.

Being the first born
Because I was the first she really schooled me, but she relaxed with my younger ones; so I grew up fast and began taking care of my younger ones. And now I'm even doing mummy for them because mama is not in the country. We lost our dad who had been ill for a while, and she was the one taking care of him. So when he died we felt she should change her environment so as to take her mind off it. So she is with my sister in the United States.

She taught us to bond as siblings
Another thing my mother taught us was bonding. You might ask, how did she do it? She was always asking us to check on one another and that's the way we are till today. I get to hear of siblings who wouldn't see one another for so long. In our case, the challenge of one belongs to all of us. Not too long ago, one of us had a challenge and we had to call each other and do a prayer chain. So we are close, and now I'm their mama (laughs).

And even now with me, I try to make people around me bond, because I remember then we had my father's relations who stayed with us and my mother never discriminated against them. And I've been trying to do that with my daughter, I'm teaching her to receive people. I never knew I'd be a pastor's wife, though I'm naturally a sanguine person, go-go person; my mum kept an open house where everyone was welcome. She taught us to be sociable.

She didn't like me singing at first
I was a broadcaster with the Akwa Ibom State Broadcasting Service, but I left that to sing because God called me to sing, (which I didn't heed immediately). When I responded to the call, my mother didn't find it funny. She wondered how I could have left a promising career, reasoning that I couldn't make a living from singing. But I told her if I was being paid for the former job, God will pay me for the singing. And God has been doing that.

Recently at one of the concerts I featured, the Nigerian Television Authority asked her how she felt and she said of course she was happy admitting that she didn't like it at first.

But ironically, the singing started with her, because we were always singing. Then she would ask us to do a special number together at fellowships. Now she is happy with it and proud of me. In fact she tells me how people accord her preferential treatment in public when they learn she is my mom.

What she told us about the opposite sex
Funny enough, she raised us with a moral code such that she didn't have much message to drum into us. But she would say if you do anything (with a boy), you'll get pregnant. However she didn't cage us, she allowed us some measure of freedom but expected us to know our boundaries. She didn't mind our having friends; in fact she preferred that we brought our friends home.