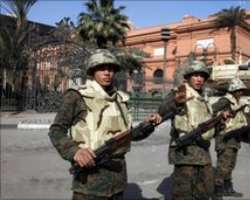 Egypt's military authorities have reaffirmed the country's commitment to all its international treaties.

The announcement, which was read by a senior officer on state TV, implicitly confirms that the country's peace treaty with Israel will remain intact.

State TV said the men were under investigation, but no more details were available.

The moves came as thousands of people maintained a presence in Cairo's Tahrir Square, celebrating President Hosni Mubarak's resignation on Friday after 18 days of protests.

Cautious welcome
"The Arab Republic of Egypt is committed to all regional and international obligations and treaties," the military statement said.

The BBC's Wyre Davis in Cairo says the statement should allay the concerns of the United States and Israel, where politicians are anxious that a change in leadership could jeopardise the 1979 peace treaty.

The deal was signed by then Egyptian President Anwar Sadat and Israeli Prime Minister Menachem Begin at Camp David, ending the Israeli occupation of the Sinai peninsula and restoring diplomatic relations.

It was the first time a major Arab country had recognised Israel, and came after four wars fought between the two countries in the previous 30 years.

Mr Netanyahu said in a statement: "The longstanding peace treaty between Israel and Egypt has greatly contributed to both countries and is the cornerstone for peace and stability in the entire Middle East."

The military also said it had asked the current government to stay on until a new one was formed, which would "pave the way for an elected civil authority to build a free democratic state".

It gave no official timetable for the transition.
The statement also called on the people to co-operate with the police, and for the police to commit to its motto: "At the service of the people."

The police force in Egypt was widely perceived as an instrument of repression under Mr Mubarak.

Protesters on Tahrir Square, in the centre of the capital, gave a cautious welcome to the army statement.

"It was a good thing," 21-year-old Muhammed Ibrahim told the Associated Press news agency. "We don't want there to be a political void."

Mr Mubarak, whose resignation was announced by his Vice-President, Omar Suleiman, on Friday afternoon, handed power to the military's high command, a body composed of high-ranking generals and headed by Defence Minister Mohamed Hussein Tantawi.

Shortly before the announcement, Mr Mubarak left Cairo for the Red Sea resort of Sharm el-Sheikh, where he has a residence.

Above politics?
In a separate development, the regulator of Egypt's stock market said trading would be put off for three more days, opening again on Wednesday.

The exchange was closed on 28 January, three days after the protests began.

The celebrations prompted by Mr Mubarak's resignation are continuing on Tahrir Square.

Our correspondent says a small army of volunteers and municipal workers is also starting to clear up.

Men and women with brooms and spades have been clearing away debris from the streets, including the rocks and other makeshift missiles used in last week's fighting between pro- and anti-government supporters.

"We want to show we are proud of our country," a student, Nora, told the BBC. "Nobody is being lazy, we are working and cleaning up this mess."

The army has removed some barricades to open one of the entrances of the square to traffic. Burnt-out vehicles have been towed away.

Some demonstrators have vowed to stay until the army gives them a blueprint for transition.

The military has managed to give the impression of being above politics, a unifying force for the nation, says the BBC's Jon Leyne in Cairo.

But the opposition wants an early and clear indication that this country is heading in a new direction and not simply swapping one dictatorship for another, says our correspondent.

The anti-government protests that began on 25 January were triggered by widespread unrest in Egypt over unemployment, poverty and corruption.