WHY WE QUASHED SALAMI'S PROMOTION - NJC 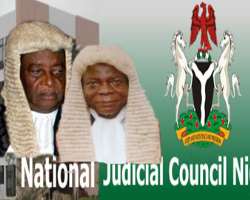 ABUJA-THE National Judicial Council, NJC, yesterday, explained why it refrained from okaying moves by the Chief Justice of Nigeria, Justice Aloysius Katsina-Alu, to elevate the President of the Court of Appeal, Justice Ayo Salami to the Supreme Court bench, insisting that doing so would be pre-judicial to a subsisting suit before a Federal High Court in Abuja.

The NJC maintained, in a statement in Abuja that though it saw nothing wrong with the process initiated by the CJN, who doubles as Chairman of the Federal Judicial Service Commission, FJSC, it decided to quash the promotion plans considering that it, the NJC, was listed as a party in the substantive suit in court.

The statement said: 'The National Judicial Council seizes this opportunity to state that in accepting or rejecting the advice of the FJSC, it takes several factors into consideration, one of which is if the person put forward by the FJSC is available and willing to be recommended to the President for appointment.

'During the fourth Emergency Meeting, Council confirmed that the opinion of a candidate short-listed for appointment to the Office of a Justice of the Supreme Court is usually not sought. However, Council firmly resolved that the name of any person who has signified in writing that he or she does not want to be considered for appointment to the office of Justice of the Supreme Court will be withdrawn from the list of persons submitted to it by the FJSC.

'For avoidance of doubt, the National Judicial Council does not see any infraction of any stage of the process by the Chief Justice of Nigeria as Chairman of the Federal Judicial Service Commission, as the Memorandum by the FJSC advising it on the appointments of four Justice of Supreme Court and Chief Judge of the Federal High Court was in compliance with the provisions of Paragraphs 13(a)(ii & v) and 21 (a)(i) of Part I of the Third Schedule to the 1999 Constitution of the Federal Republic of Nigeria.

'Consequently, FJSC had acted within its Constitutional powers when it considered all the four candidates, including the Hon. President of the Court of Appeal, Hon. Justice Isa Ayo Salalmi, OFR, for appointment to the Supreme Court Bench.

It is to be stressed that from the records available to the Council, Hon. Justice Salami, OFR, also participated in the nomination process of some Justice of the Court of Appeal in the present exercise.