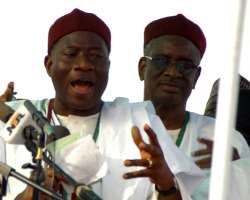 Addressing a press conference in Abuja, Chief Ogbonna said, “The President believes in the rule of law and our party is not above the law, INEC has de-listed the name of Governor Chime and said that it made a mistake. It therefore follows that the governorship flag of the PDP should not be handed over to Chime.

“The rally in Enugu will serve as a test of the avowed rule of law of President Jonathan and the Acting National Chairman.

“President Jonathan and the Acting National Chairman must hand over to Engr. Anayo Onwuegbu, who is the rightful governorship candidate,” Ogbonna stated.

Another PDP Governor with a senatorial ambition, Otunba Gbenga Daniel (Ogun State) also had his candidacy blocked by a court. But a State High Court today ruled that his faction of the PDP in the state is the authentic faction and analysts are watching with keen interest to see how the electoral commission would handle the latest ruling.

But the PDP in a bid to convince Daniel not to decamp to another party sent a team made up of Board of Trustees member, Chief Tony Anenih, Chief of Staff to the President, Mr. Mike Ogiadomhe and Party National Secretary, Kawu Baraje to appeal to Daniel to remain in the party as efforts were been made to resolve issues surrounding the fate of his faction of the party.