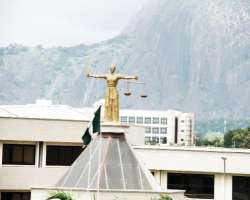 ABUJA, Feb 08, (THEWILL) - A civil society group, Socio-Economic Rights and Accountability Project (SERAP) has petitioned Ms. Gabriela KNAUL, the UN Special Rapporteur on the independence of judges and lawyers over alleged “attacks by the Nigerian government on the independence and impartiality of judges, and the consequent denial of the internationally recognized right of the citizens to an effective remedy.”

In a petition dated 8 February 2011 and signed by SERAP Executive Director Adetokunbo Mumuni, the group said that, “We note that Justice Salami has been an activist judge who has consistently stood for justice and fair play in his position as President of the Court of Appeal. It would seem that the law is being used in this case as an instrument of political manipulation to perpetuate injustice against Justice Salami apparently for future political and election gains of the Nigerian government.

“We are seriously concerned that the purported ‘promotion’ may be a ploy to remove Justice Salami from the Court of Appeal without due process and any justifications whatsoever, so as to pave the way for a pro-government judge to be appointed to the Court of Appeal. The Court of Appeal performs important functions in the adjudication of election disputes. The recommendation to ‘promote’ Justice Salami therefore raises questions especially given that it is coming just weeks before a general election.

“We are concerned that the recommendation of Justice Salami for ‘promotion’ undermines the fundamental principles of separation of powers and supremacy of the rule of law, both of which are pre-requisites for an administration of justice which ensures independence, impartiality, integrity, equality, transparency, and the protection of human rights,” the group added.

The group also said that, “The purported recommendation is entirely inconsistent with the UN Convention against Corruption, and the Basic Principles on the Independence of the Judiciary, which require states to ensure impartiality and transparency in judicial decisions, which should always be based on facts, and be made in accordance with the law, without undue influences, inducements, pressures, threats or interferences, whether direct or indirect. According to the Basic Principles, “It is the duty of all governmental and other institutions to respect and observe the independence of the judiciary.

“The recommendation to remove Justice Salami from the Court of Appeal is also discriminatory because it is not based on objective factor but rather as a punishment for his activism and his judicial opinions, which is implicitly prohibited under the Basic Principles. This process has seriously undermined the term of office of Justice Salami, his independence, security and conditions of service.

“We further state that judicial independence is necessary and indeed a sine qua non, not for the personal benefit of judges, but rather for the protection of those who appear before the courts, and those affected by their decisions. We also believe that the apparent removal of Justice Salami from his position as the President of the Court of Appeal undermines the rule of law, which is the establishment of individual freedoms and the protection against any manifestation of arbitrary power by the public authorities,” the group added.

“The action by the Nigerian government is capable of undermining the government’s ability to secure a steady, upright, and impartial administration of the laws, a responsibility required by international and regional human rights treaties, the African Charter on Human and Peoples’ Rights t which Nigeria is a state party,” the group further said.