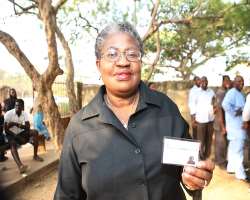 LAGOS, Feb 03, (THEWILL) – Intrigues and political maneuvering has continued to trail the emergence of a formidable running mate for the Action Congress of Nigeria (ACN) Presidential candidate, Mallam Nuhu Ribadu even though his director of campaign, Mr. Sunny Ugochukwu has been named by the party following the rejection of Ribadu’s nomination of respected economist and Managing Director of the World Bank, Dr. Ngozi Okonjo-Iweala.

THEWILL checks at the ACN revealed that Ugochukwu’s emergence, as running mate is a stopgap measure to enable the party beat the electoral commission’s January 31, 2011 deadline for the submission of names of candidates for the April election.

Ugochukwu’s nomination THEWILL gathered would be substituted before the February 15, 2011 deadline outlined by INEC for the substitution of candidates.

An authoritative source in the party told THEWILL that Ribadu opted for Dr. Okonjo-Iweala following her impressive career in ‘diplomatic economics’ and present profile in the international community. Ribadu was said to have rejected the option of running alongside former Anambra State Governor, Dr. Chris Ngige, who was favoured by Tinubu’s loyalists.

The source said party founder and former Lagos State Governor, Asiwaju Bola Ahmed Tinubu and his loyalists objected to the nomination of Okonjo-Iweala for diverse reasons which bordered on core principles of the party in terms of party membership. Tinubu particularly was said to be indisposed to the choice of Okonjo-Iweala because she is highly opinionated.

Tinubu also expressed strong opposition to her nomination because she is not a card-carrying member of the party; a condition which the former governor reportedly said was not good enough for the party.

The source said Tinubu “is not happy with the manner some persons who are not members of the Action Congress of Nigeria join the party and pick up tickets. Tinubu is averse to the development.

“Tinubu had complained about Mallam Nuhu Ribadu’s candidature when some persons brought him to the party to contest the April election as Presidential candidate. In the case of Ribadu’s running mate, Tinubu did not want the same thing to happen in order not to allow any person or interest to use the party and dump it later,” the source explained.

The source said it was on this ground that the former governor and few other national leaders of the party opposed the nomination of Okonjo-Iweala to run with the party’s presidential candidate in the April 9 Presidential Election.

His choice was however not popular amongst party leaders and loyalists.

But with the collapse of alliance talks between the ACN and Buhari’s Congress for Progressive Change (CPC), Party leaders the source said have gone back to the drawing board.

The new thinking according to the source is that the ACN must spread its net across the South-East geo-political zone in order to garner crucial votes in the region. The party leaders are of the opinion that a popular candidate from the zone with clout and respect amongst elites and the masses would give the party inroads into the South-East.

This is where Ribadu seem to be having a stronger argument with the choice of Okonjo-Iweala.

Another factor working for the former Minister for Finance and Foreign Affairs is gender consideration, the source said.

The ACN recognizes the role of women in politics and even the party’s constitution acknowledges executive roles for the female gender. This practice helped three women become deputies in three states out of four where the party controls the executive arm of government.

The source confirmed to THEWILL that Tinubu has turned around and is now disposed to the thinking and recommendations of a think-tank, Ribadu and opinion of some party leaders that Okonjo-Iweala should be approved as Ribadu’s deputy.

The party is expected to make a formal announcement on or before February 15, 2011 on its choice to pair Ribadu in line with gender and geo-political consideration according to the source.