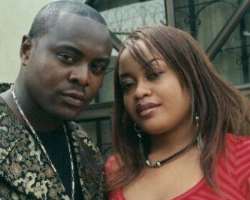 Actress Nkiru is in a romance so hot it could burn the nose of whoever tries to pokenose into her affairs!

According to olofofos the man who has captured the heart of the actress is non other than Asha Gangali who hails from western Nigeria.
The olofofos says''Asha and Nkiru met in 2006 on the set of his musical video and they have been in an under-g relationship ever since.

He wrote her a love song and from the ways things are going he is likely to propose to her on valentines day 2011 and even though he has been celibate for a year and a half he might break the record on valentines day as well after the proposal.

Their relationship has been based on pure love and no sex.he is however madly in love with nkiru and she has so far returned his affections''.

''He was doing very well in america before he relocated to nigeria some years back,has a very sexy voice but has not broken into any music industry.

He is from a very wealthy family but they are very low key and do not flaunt their wealth''.

Asha has a talent agency called 'roc da mic' which he concentrates to make a success out of.

Nkiru is one of those actresses who tries to steer clear of anything that would label her controversial so this is indeed good news.

Our forefathers postulate that ''just as man no fit hide shadow na so love matter be''.

Congratulations to the latest couple in town...Lets keep our fingers crossed for the valentines day 2011 proposal!