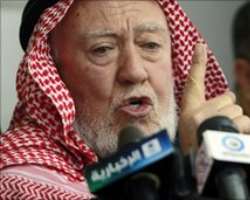 Prince Hassan: “We are living in a time of deep anxiety in the Arab world”

King Abdullah of Jordan has dismissed his cabinet and appointed a new prime minister amid large street protests.

New PM Marouf Bakhit has been charged with carrying out “true political reforms”, but the Islamist opposition rejected the appointment.

The protesters had demanded action on unemployment and rising prices and the right to elect the prime minister.

They blamed former PM Samir Rifai for the country's economic problems and had called on him to stand down.

The palace said the king had accepted Mr Rifai's resignation earlier on Tuesday.

The move is being seen as an attempt to head off further trouble from angry Jordanians, in the wake of the unrest in Tunisia and Egypt.

In a statement, the palace said the new prime minister's mission was “to take practical, quick and tangible steps to launch true political reforms, enhance Jordan's democratic drive and ensure safe and decent living for all Jordanians”.

Reform was a “necessity to provide a better life for our people, but we won't be able to attain that without real political reforms, which must increase popular participation in the decision-making”, it said.

'History of corruption'
Mr Bakhit, a retired army major-general, served as Jordan's prime minister from 2005 until his resignation in 2007.

Before then he served as the kingdom's national security adviser and its ambassador to Israel.

Critics point out that Mr Bakhit did not achieve many of the reforms he promised during his last tenure and they wonder what he will accomplish this time around.'

Dale Gavlak
BBC News, Amman
New PM unlikely to appease protesters
He was also the head of a state committee that oversaw the implementation of the peace treaty that Jordan signed with Israel in 1994, and served as ambassador to Turkey for three years.

He has a doctorate in political science and taught the subject at a university for army and police recruits in southern Jordan.

“With the choice of Bakhit, it's obvious that reforms have not started yet. We are against Bakhit because our experience with him is not encouraging,” IAF head Hamzah Mansur told the AFP news agency.

“There is no reason to stop the protests now,” he said.

The IAF has always said it believed elections in 2007, after which Mr Bakhit stood down, were rigged.

“He carried out the worst parliamentary elections in Jordan in 2007,” said Zaki Bani Rsheid, another IAF leader.

“He is not the right person to run things at this current state and get Jordan out of crisis,” he said.

“We need a man who is well respected by the people, a man who does not have a history of corruption and oppression. How can he lead political reform?”

The IAF has said repeatedly it is not seeking to oust King Abdullah, who has the power to appoint governments, approve legislation and dissolve parliament.

Jordan has a high unemployment rate among its population of six million, the majority of whom are under 25, and is suffering from the rising food and fuel prices which have affected many of its neighbours.

The country has seen three weeks of largely peaceful protests, inspired by those in Tunisia which unseated President Zine al-Abedine Ben Ali and the ongoing unrest in Egypt.

The government recently announced a $125m (£78m) package to reduce prices, as well as measures to boost salaries, in an attempt to ease the protests.

But many of those on the streets said the measures were not enough and have demanded more extensive political reforms, including the right to directly elect the prime minister.