Egypt's Mubarak Say Will Step Down In September 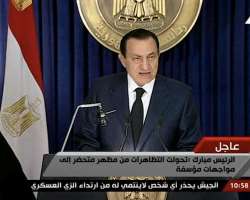 A VIDEO SHOT OF PRESIDENT HOSNI MUBARAK DURING HIS TELEVISED SPEECH TO EGYPTIANS TODAY, FEB 01, 2011.
Listen to article

SAN FRANCISCO, Feb 01, (THEWILL) – Egyptian President Hosni Mubarak in his second televised speech in one week after about a million Egyptians took to the streets today asking him to step down said, he would not seek reelection in September.

The full text of Mubaraks speech reads: "I talk to you during critical times that are testing Egypt and its people which could sweep them into the unknown. The country is passing through difficult times and tough experiences which began with noble youths and citizens who practise their rights to peaceful demonstrations and protests, expressing their concerns and aspirations but they were quickly exploited by those who sought to spread chaos and violence, confrontation and to violate the constitutional legitimacy and to attack it.

"Those protests were transformed from a noble and civilised phenomenon of practising freedom of expression to unfortunate clashes, mobilised and controlled by political forces that wanted to escalate and worsen the situation. They targeted the nation's security and stability through acts of provocation theft and looting and setting fires and blocking roads and attacking vital installations and public and private properties and storming some diplomatic missions.

"We are living together painful days and the most painful thing is the fear that affected the huge majority of Egyptians and caused concern and anxiety over what tomorrow could bring them and their families and the future of their country.

"The events of the last few days require us all as a people and as a leadership to chose between chaos and stability and to set in front of us new circumstances and a new Egyptian reality which our people and armed forces must work with wisely and in the interest of Egypt and its citizens.

"Dear bothers and citizens, I took the initiative of forming a new government with new priorities and duties that respond to the demand of our youth and their mission. I entrusted the vice president with the task of holding dialogue with all the political forces and factions about all the issues that have been raised concerning political and democratic reform and the constitutional and legislative amendments required to realise these legitimate demands and to restore law and order but there are some political forces who have refused this call to dialogue, sticking to their particular agendas without concern for the current delicate circumstances of Egypt and its people.

"In light of this refusal to the call for dialogue and this is a call which remains standing, I direct my speech today directly to the people, its Muslims and Christians, old and young, peasants and workers, and all Egyptian men and women in the countryside and city over the whole country.

"I have never, ever been seeking power and the people know the difficult circumstances that I shouldered my responsibility and what I offered this country in war and peace, just as I am a man from the armed forces and it is not in my nature to betray the trust or give up my responsibilities and duties.

"My primary responsibility now is security and independence of the nation to ensure a peaceful transfer of power in circumstances that protect Egypt and the Egyptians and allow handing over responsibility to whoever the people choose in the coming presidential election.

"I say in all honesty and regardless of the current situation that I did not intend to nominate myself for a new presidential term. I have spent enough years of my life in the service of Egypt and its people.

"I am now absolutely determined to finish my work for the nation in a way that ensures handing over its safe-keeping and banner ... preserving its legitimacy and respecting the constitution.

"I will work in the remaining months of my term to take the steps to ensure a peaceful transfer of power.

"According to my constitutional powers, I call on parliament in both its houses to discuss amending article 76 and 77 of the constitution concerning the conditions on running for presidency of the republic and it sets specific a period for the presidential term. In order for the current parliament in both houses to be able to discuss these constitutional amendments and the legislative amendments linked to it for laws that complement the constitution and to ensure the participation of all the political forces in these discussions, I demand parliament to adhere to the word of the judiciary and its verdicts concerning the latest cases which have been legally challenged.

"I will entrust the new government to perform in ways that will achieve the legitimate rights of the people and that its performance should express the people and their aspirations of political, social and economic reform and to allow job opportunities and combating poverty, realising social justice.

"In this context, I charge the police apparatus to carry out its duty in serving the people, protecting the citizens with integrity and honour with complete respect for their rights, freedom and dignity.

"I also demand the judicial and supervisory authorities to take immediately the necessary measures to continue pursuing outlaws and to investigate those who caused the security disarray and those who undertook acts of theft, looting and setting fires and terrorising citizens.

"This is my pledge to the people during the last remaining months of my current term:

"I ask God to help me to honour this pledge to complete my vocation to Egypt and its people in what satisfies God, the nation and its people.

"Dear citizens, Egypt will emerge from these current circumstances stronger, more confident and unified and stable. And our people will emerge with more awareness of how to achieve reconciliation and be more determined not to undermine its future and destiny.

"Hosni Mubarak who speaks to you today is proud of the long years he spent in the service of Egypt and its people. This dear nation is my country, it is the country of all Egyptians, here I have lived and fought for its sake and I defended its land, its sovereignty and interests and on this land I will die and history will judge me and others for our merits and faults.

"The nation remains. Visitors come and go but ancient Egypt will remain eternal, its banner and safekeeping will pass from one generation to the next. It is up to us to ensure this in pride and dignity."