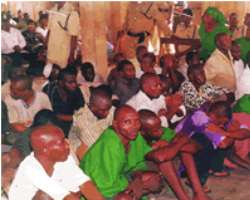 Zakari, who is a resident of the Giginyu Quarters, Hotoro, was remanded in prison custody after being arraigned in court by the Economic and Financial Crimes Commission (EFCC) following complaints from several of his victims.

Dahiru Jafaru Usman, solicitor to Obajana Cement Company, one of the subsidiaries of Dangote Group, had lodged a complaint with the EFCC to the effect that the accused received by false pretence large quantities of cements valued at N18, 360.000.00K and issued an Ecobank cheque (No: 05660921) to cover the monetary worth of the cement, which was not honoured by the bank.

He recalled that the suspect had approached the Assistant Sales Manager for Northwest Regional Office of the company in April 2010 and purchased 20 articulated vehicles, the equivalent of 120,000 bags of cement, before issuing the aforementioned Ecobank cheque.

In a similar development, one Alhaji Magaji Ubade of Magmut Oil Ventures had reported to the EFCC that the said Alhaji Zakari had lured his company into supplying him a total of 2,363,000 litres of petrol, and 33,000 litres of kerosene, amounting to the sum of N83,160,000.00k.

The complainant further alleged to the EFCC that Alhaji Zakari, who holds a bachelor's degree in Economics from Ahmadu Bello University issued many cheques to pay for the goods he received from him, regretting that all of the cheques were not honoured by his various bankers.

He recalled that the suspect claimed to be a businessman, with interests in road construction, manufacturing of groundnut cake and RMM seasons snacks and the supply of petroleum products, while listing many companies such as Flour Mills Plc (makers of Golden Penny), MTN and Salama Nigeria Limited as some his customers.

If convicted under Advance Fee Fraud and other Fraud Related Offences Act 2006, Alhaji Zakari may be jailed for not less than seven years, without the option of fine.