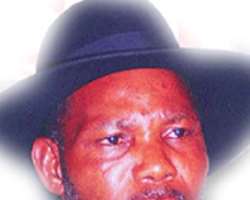 
Call Brown Ebewele 'Mr Controversy' and you would not be making any mistake. In fact, the man who worked tirelessly for Nigeria's victory at the Abuja Games in 2003 is better known by his alias 'Juju man'.

For the sake of curiosity, many are wont to believe that the former Edo State commissioner for sports under the administration of former governor, Lucky Igbinedion, got adapted to the name because of his outright manner of tackling issues not minding whose ox is gored.

While he has continued to bask in the euphoria of this alias, no many of his fans and followers really can tell the real reason he is called Juju man. Though, some believe that his many confrontations with those in authority at different times may have earned him that sobriquet of a man with fetish powers.

The ever-bubbling and enthusiastic Ebewele, only recently revealed the true story behind the alias that has since been synonymous with his personality. He told Sunday Sunsports that not even in his active days as a decathlete was he given such an alias. Rather, it came during one of his many sojourns around the country taking charge of sports in different states.

'It was back in 1987 when I was in Kano State working as a consultant coach that events led to that alias. The then commissioner of sports in the state, Alhaji Ibrahim Galadima, had requested that I take a look at the state's contingent to the National Sports Festival in Port Harcourt and I did. But after going round the camps, I reported back to him that Kano had no team and was not going to make any impact at the festival.'

Unfortunately, my comments were taken out of context, a situation that led to my appearing before a panel made up of various government officials. I got there and before the panel, I defended my position without bothering about the faces before me. My defence further infuriated them such that they left the meeting, reassuring themselves that the state would prove me wrong.'

Though Ebewele was confident about his findings that the Kano team was barely average, the contingent hit Port Harcourt full of expectations that it would surprise all not minding the conclusion of the former international athlete. By the end of the Games, the Kano State team settled for the lower rung in the medals table.

'When the Games ended, the performance of the Kano State team was a huge disappointment. Its only gold medal came from athletics, where I was in charge. 'As the various teams and delegates prepared to depart the Presidential Hotel in Port Harcourt, I arrived the hotel to join the Kano State delegation, and as soon as I entered the room where the leader of the delegation was, one Alhaji among them said in Hausa, 'look at this our coach, he must be using 'magani' to know before hand that our team would not perform well at the Games.'

He was quickly cut off by another Alhaji, who said that I was not using 'magani' but that I was the 'magani' itself. 'Curious to find out what they were talking about, I asked for the interpretation of their statements and was told that 'magani' meant juju and that I was, therefore, the juju man of sports in Nigeria. And before I knew it, many of them had started calling me by that alias and it has stuck with me since then.'

Asked if the alias does not portray him in a negative light, Ebewele, with a wave of the hand dismissed it as noting, stating that he has always stood for the truth and the best way to move athletics and sports in general in the country forward.

On his regrets in sports, Ebewele said looking back, he's a fulfilled man in sports.

'I don't have any regrets. I must tell you that if I think of all the excitement I've had in sports over the years, then there's no need to think twice about sports. I've had great times and would be in sports all over again if I have to.'

Speaking on the problems of sports in Nigeria, Ebewele, who has delved into politics, said that Nigeria as a nation has not been serious about sports. 'Sports is an expensive venture and as a nation, we need to understand this if we must move to the next level. The biggest problem with our sports is poor funding and this affects the athletes, coaches and equipment as well.

'If we intend to make any impact at the forthcoming All Africa Games later in the year in Mozambique and at the London 2012 Olympics, the government need to make funds available for the athletes and their federations.

'Our athletes are talented and can make things happen if they are well motivated. Should other athletes from other countries undergo the kind of training our athletes go through, they would simply break down and would not be able to compete effectively,' he stressed.