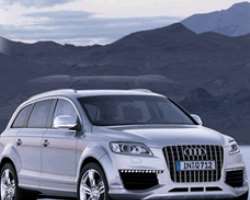 •Audi Q7
German luxury car maker, Audi, has carried over its winning streak to the new, and is literally garnering honours everywhere in the world even as the first month of the year is yet to run out. At the Detroit Motor Show that ended recently, at the recent What Car? Award, and on other honours lists rolled out in the past few days, the brand was on top of many segment.

Early last week, new Audi A1 scooped the top honour at the prestigious awards last night at the Grosvenor House Hotel in London's Park Lane. Peter Schwarzenbauer, a board member for Marketing and Sales at AUDI AG, accepted the award and said:

:'Our buyers can have great confidence in the A1 now that it has been voted the best by the respected car experts who we know are exceptionally thorough in their testing. We know this is right up there among the very hardest awards to win from a car title anywhere in the world.'

The A1 is 'top of the pile in so many ways' The A1 has also clinched the Best Supermini title for 2011. Having been voted by the readers as the Most Exciting Car of 2010 at last year's awards, the A1 has fulfilled its promise in the eyes of the judges. Jeremy Hicks, Director of Audi UK said: 'It's an incredible honour for the A1 to win three awards in its debut year. We were naturally thrilled when it won the Most Exciting Car of the Year award in 2010, but for it to win the Supermini category and then the Car of the Year award overall in 2011 is extraordinary'.

Extraordinary was also the word used by Josephine Nwosu of Audi Centre, the division of Stallion Motors that markets the German brand in Nigeria, to describe the remarkable achievement by TT, one of A1's siblings. The TT topped the Coupe category for the fifth consecutive time at the What Car? Awards. The judges felt that the Audi TT is 'better than it has ever been' thanks to its new turbocharged 2.0 TFSI engine, which develops 211PS for exhilarating performance.

The panel also praised the Audi TT's handling, commenting that it comes in to its own when cornering: 'The strong grip and body control means it changes direction like a housefly, while the responses from the steering, throttle and brakes are razor-sharp. This is a sports car with real finesse Also extraordinary and remarkable is this:

For the fourth time in the past three years, an Audi model has won a prestigious EyesOn Design Award recognizing the best of automotive design displayed at the North American International Auto Show in Detroit. This year the panel of judges recognized the redesigned Audi A6 as the 'Best Production Vehicle' design displayed at the Detroit show, which ranks among the world's premier automotive exhibitions. 'This is strong feedback that we have done our homework,' Achim Badstuebner, head of exterior design for AUDI AG, said in accepting the EyesOn Design trophy.