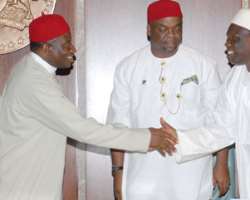 LAGOS-THE call by the Arewa Consultative Forum, ACF, on President Goodluck Jonathan to abandon his presidential bid, yesterday, has divided the organisation with prominent northerners railing against the call.

There were, however, mixed responses from prominent northerners with Governor Sule Lamido of Jigawa State assuring Nigerians that the North will back the President.

It also emerged that the communique purportedly issued by the ACF after last Tuesday's meeting was doctored as a group led by the former Secretary, Political Committee of the Arewa Consultative Forum, ACF, and member of the National Executive Council of the Forum, Alhaji Mohammed Abdulrahman disowned the version purportedly asking President Jonathan to abandon his presidential ambition.

He was, however, immediately rebuffed by the National Publicity Secretary of the ACF, Anthony AZ Sani who said there was no contention on the resolution adopted by the body on Tuesday.

Northern caucus of House of Reps meet
Meanwhile, the powerful Northern caucus of the House of Representatives is set to meet in the next few days to take a position on the ACF resolution.The ACF had after a meeting, Tuesday, declared the emergence of President Jonathan as the PDP Presidential Candidate as legally and morally wrong, adding that the north must produce the next president.

Noting that the group was in similar mould with other socio_cultural groups like Ohaneze and Afenifere, he said: 'They are meeting to discuss like Ohaneze or Afenifere. There are 60 parties in the North, so there can't be 60 organizations all clamouring for the North. So they are free to meet as friends as they all believe in the north. They can meet, they can advise, there is no problem. There is no fear over anything, just relax, stop getting worried.

'I am not worried because we went through a number of things including civil war, it can't be worst than that. We came out of it clean and clear and we reconciled as a country united under God. There is no cause for fear. We will secure your future. Don't worry.'

Asking the ACF to strict to its apolitical objectives as formulated at inception, Senator Ahmed said:

'For an organization like ACF they should be consistent not only in its organization and its formation, but also in its utterances because at one time they were saying they were a non political organization, since when have they amended that status and become political?'

Noting that Section 221 of the constitution restricted political pronouncement to only political parties, Senator Ahmed said: 'Though what they said may not be directly political, but it can be seen as a negative contribution to one candidate!'

ACF communique
Speaking to newsmen in Abuja, Alhaji Abdulrahman disowned the content of the ACF communique issued after last Tuesday's meeting in Kaduna saying a group twisted the resolution adopted at the meeting.

Abdulrahman said: 'So if there is any issue like I'm reading in the front  pages of the newspapers, it never happened there. This is a doctored communiquÃ©, probably reflecting the personal whims or ideas or agenda of certain people but certainly not that of  the Arewa Consultative Forum.

'I am just trying to keep the records straight, because when we held a meeting of ACF yesterday, it was decided that at the ACF National Executive Committee held in Kaduna that the reaction and development that were fallout of the primaries of all the parties, it was decided that the political committee of ACF should convene a meeting immediately, and that individual opinions and reactions are not the issue because ACF must take a common stand on the matter.

The ACF resolution was itself received with mixed feelings in the House of Representatives yesterday. While Rep Hon. Aminu Shagari, PDP, Yabo/Shagari Federal constituency Sokoto State; endorsed the resolution as reflective of northern opinion, Rep Bitrus Kaze, PDP, Jos South/Jos East Federal Constituency of Plateau State, sharply disagreed saying that the President was in good standing to contest and would be backed by the North.

Rep. Ibrahim Bawa Kamba, PDP, Arewa/Dandi Federal Constituency of Kebbi State, on his part refused to wait for the expected meeting of the Northern caucus of the House on the issue.

He said: 'Unfortunately, the position of Arewa Consultative Forum is the general opinion of the North. President Goodluck met a zoning arrangement on ground. He should have abided by it.'

Rep. Kaze on his part said: 'I do not share the position of the ACF because there is nothing morally and legally wrong with President Jonathan Goodluck contesting the primary of the PDP.