SUBMISSION OF CANDIDATES: WHAT THE LAW SAYS 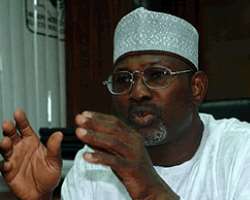 •Prof. Jega
The question of who wins a party's primary election is not an end in itself. Issues arising from malpractices, fraud and other acts that are not in consonance with the principles and procedures laid down for the primaries may have taken place during the primaries.

The party can, if it is satisfied with complaint made against the primaries, set up an appeal panel to review such cases of abuse and malpractice, and make recommendations to the party on whose name to send to INEC.

The legal position in this respect before now is that any candidate whose candidacy is first forwarded by the party to INEC can be substituted by the party if a cogent and verifiable reason is given, but in the present Electoral Act, unless the person withdraws by himself or dies, as provided for in Section 35, 36 of the 2010 Electoral Act, there can't be any substitution.

'The nomination by a political party may be by way of primary election, selection, appointment etc or a combination of the above.

Whatever the method adopted, the law is that nomination of a candidate to be sponsored by a political party remains within the absolute jurisdiction of the political parties'.

At Ratio 4 the judgment of Ehinlawo v Oke the court further held that: 'The court will not normally interfere with how a political party arrives at its list of candidates forwarded to Independent National Electoral Commission.'

Onnoghen JSC also held in Ratio 4 'That a political party is not bound to submit the name of a candidate who emerges the winner of the primaries conducted by it in its list of candidates.'

The court have also held that it does not matter who wins the primary election of any political party that what is paramount is any person whose name is sent to INEC becomes the candidate of the party.

This is in line with the court decision in AKPAN v BOB EFFIONG, AS (2010) 4-7 SC (PT.II) at page 57,  the position of the law is that any person whose name is sent to INEC cannot be substituted even if the person did not win the earlier primaries conducted by the party.

We submit from the above that a party reserves the right to send names of its candidates to INEC after having looked into all the complaints made by aggrieved individuals, and the decision of the party to sponsor any candidate cannot be inquired into as how the candidate's name made the list. The above position was enunciated in the case of EHINLAWO  v OKE.

Finally, the position of the law is that the court will not interfere with how a political party arrives at its list of candidates forwarded to INEC as the chosen candidates to contest Election. The political party could take a number of factors into consideration in arriving at the final list of its candidates to be sent to INEC. Failure to act on the result of the primaries, therefore, does not invalidate the list sent to INEC or make it enforceable in court.

It is the prerogative of the party to send the name of any candidate it wishes INEC to represent it in an election.

•Hon. Eseme Eyiboh, is the Chairman, House of Representatives Committee on Media and Publicity.