NWODO AS A FALL GUY 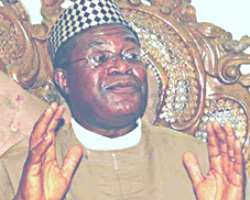 Nwodo
Nigerian politics, especially in the ruling Peoples Democratic Party (PDP), tolerates drama very well. Politics in this party, sometimes derisively called People Deceiving People because of its unwholesome and deceitful behaviour that hurts the people it ought to be representing their interests has lost its essence. Worryingly, events in the PDP is like a circus show that never stops turning. They have the colouration of the good, the bad and the ugly. Sometimes, happenings in PDP can be likened to inflation: the more we have it, the more things cost.

That's PDP for you.
Like a drama, PDP is always a fun to follow. It is stoked with characters, many of whose approach to politics is fiendish. Most of its politicians harvest in crisis. They don't hit their targets unless there's a crisis. That's why when things are going out of joints in our country, PDP provides the needed tonic that tends to soothe our frayed nerves. Indeed, the last couple of weeks had been a dizzying season of poison and perfidy in the party. That much is hardly debatable any more.

The tempest that began at the recently-concluded Special Presidential primaries' convention in Abuja, became a fiery storm exactly a week ago when Dr. Okwesilieze Nwodo was forced to resign as the National Chairman of the party.

The storm is still rocking the ship. Members are just taking a shelter under a shaky umbrella. It is fair enough to say that PDP without the storm is like a doughnut without a hole. The party rivets our attention almost every time - all for the wrong reason.

In truth, PDP and whatever it represents, holds such a sorry message, a message of how not to govern a country. Sadly, after 11 years in power at the centre, PDP has not learned how to manage its success. That's why a cloud of uncertainties and hinges continue to hang over the country each time there is a crisis, no matter how insignificant the issue at stake might be, rocks the party down to the middle. As the party in power, we can't ignore the sordid events. Therefore, crisis in the party can't be said to be a 'family' affair any longer

That's why the forced resignation of Nwodo last Tuesday must be seen in its sorry, sordid context, even though the party hierarchy, including the President insist there was nothing 'odd or aberrational' about his exit. Maybe, the president was right.

He cited 'certain norms' that guide every organisation, which must not be breached. Interpretation: Nwodo may have stepped on some powerful toes or fouled the waters of PDP. Former secretary of the party and erstwhile information minister, Prof. Jerry Gana gave a more direct reason for the humiliation of Nwodo. He alleged that Nwodo 'embarrassed' the party at the convention when he attempted to take over proceedings from the deputy national chairman, now Acting chairman, Alhaji Haliru Bello Mohammed.

Whatever reason advanced by the party or its officials to justify the forced resignation of Nwodo, few things are curiously incurious about his exit. It follows a noxious path that the party has treaded since inception as it concerns the position of its National chairman. The party hawks would not be satisfied with a resignation, he must be disgraced.

If you are in doubt, look at the party history. Perhaps with the exception of Chief Solomon Lar, every National chairman of the party has left in a cloud of confusion, in disgrace rather than with grace and honour. How did Barnabas Gemade leave office? How did his kinsman, Audu Ogbeh leave? How did Dr. Ahmadu Ali go? What about Prince Vincent Ogbulafor? They were all beneficiaries of a skewed political process that has become the hallmark and hubris of the party. Almost the same hawksthat consumed these men have taken the head of Dr. Nwodo, once the National Secretary of the party.

The fact is this: PDP is a party controlled by rightwing politicians, who for want of a better name, belong to a caucus of the party known in politics as the party track. Called it a high-profile road traveled only by team-minded politicians, with an ' us - against - them' orientation. They are marchevillian in their approach to politics, the end justifies the means, and anybody who stands in the way of achieving power must be crushed. Interestingly, what happens in the party track is either not too visible to outsiders or it is too dull to hold their attention. You many never know what riles this select group, because often, they act in a mafian way.

Nwodo is the latest of the victims. But, he possibly was his own enemy, either because he did not know the intricacies of the men in the party track or he wittingly, or unwittingly, played into their hands. By the time he noticed that, he had come to the end of the road. They had already bought his coffin almost immediately he became the party boss. The National Executive Committee (NEC) of the party which met last Tuesday only asked him how he would want to be buried. And in such a labyrinth political coup d'etat, the plots start from the home. Unknown to Nwodo, a 'boy of yesterday', by name Sullivan Chime became the foil to wrap Nwodo's obituary. Matched against the Nwodo dynasty, Chime is a 'lightweight', but the governor recruited tank commanders who knew how to sell water in the desert even when it's raining.

It was a dangerous 'sell pitch' that began with a seemingly harmless court order in Enugu reminiscent of Justice Ikpeme in the early 1990's. Nwodo didn't take it serious. Ordinarily, the order by Justice R.N. Onuorah ought to be an Ogbete market kind of judgment. Trivia, with no force in law. But no, the orchestrators were legion and powerful, but behind the veil. All they needed to get a presidential approval was to link Nwodo's name to Atiku Abubakar, the president's supposed Public Enemy Number one. It's like saying ' we have caught a 'man sleeping with a man'. What an abomination. Top Igbo politicians and governors signed on to the plot.

That's the problem with Igbo politicians, brothers against brothers. Igbo politicians always behave and act like a squad, not like a team. There is no singleness of purpose and team spirit. That's why it is sadistic for one Governor from the SouthEast to gloat over the downfall of Nwodo. I have heard some people argue that it was not surprising that Nwodo ended this way, that he was an accident just waiting to happen, especially when he allegedly, forcefully took over the executive committee of the party in his home state of Enugu as well as the dissolution of the party executives in some states.

Nonetheless, Nwodo is just a fall guy in a party that instability has become its second nature. When a party lacks vision, it sows the seed of crisis and cannot boast of any enduring political life to move a nation forward. Nigerians have given PDP a long robe for eleven years. It should not use it to hang itself. But, that is what party is doing

Today at the NASS
After the ignoble exit of Dr. Okwesilieze Nwodo from the top chair of the self-styled 'largest party in Africa', attention should shift to the two chambers of the National Assembly, the Senate and House of Representatives, which reconvene today after a month-long recess. The two chambers had postponed the resumption from the earlier date, January 18.

That shift in date has prompted questions: Is there a storm brewing?

Is rumpus in the air against the senate President, David Mark and his Reps counterpart, speaker Dimeji Bankole?

Though the leadership of both chambers had denied any plot against Mark and Bankole, the truth is that the two officers are not in fine fettle with most members, especially those who lost at the primaries. The casualties are much. Over 84 senators lost their bid for re-election and an amazing 280 reps. what has Mark and Bankole got to do with their loss? Is it just a transferred aggression? More seriously is the alleged $10,000 said to have been doled out by President Jonathan to each member of PDP in the two chambers to support his aspiration during the recently- concluded PDP presidential primaries' convention.

The principal officers of the NASS were alleged to have withheld $2,300 from each member's largesse. These aggrieved members, sources say, are spoiling for a messy fight today. Expect a lot of corruption allegations today. It is not too early to ask the question: how will history judge the present lawmakers at the National Assembly? Keep a close watch on the National Assembly, today.