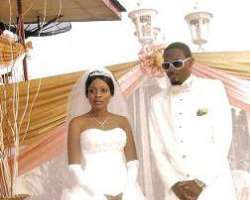 Hycinth Idibia and wife
Wedding ceremonies are characterizations of social life in Freetown, capital of Sierra Leone but one wedding that drew crowds to the streets and has remained a a topic of household discussions is the one between Hassanatu Kanu, a popular Sierra Leonean star in the Nigerian film industry and Hycinth Idibia, younger brother of Two Face Idibia, international musical maestro.

The wedding attracted top placed personalities in Sierra Leone and people from all strata of society.

On December 17 all roads led to Joe Town, a village near Newton, 24 miles from the capital, Freetown.

The bride, Hassanatu Kanu, whose movie name is Sana Kanu, is the daughter of Hassan Gbessay Kanu, who held several ministerial positions in Sierra Leone in the 80s.

After their traditional covenant, the couple on December 18 went to Sacred Heart Cathedral in the capital Freetown to solemnize their vow the Christian way.

There, they also vowed to be together for better or for worse till death do part them. After the ceremony, crowds thronged the streets to set eyes on the bridegroom, whose marriage had the blessing of no less a person than His Excellency Ernest Bai Koroma and apparently to set eyes on Two Face Idibia.

The wedding ceremonies were subsequently followed by festivities that lasted for days. It was viewed by the village residents that the success of Hassanatu is success for the whole community.

Because of the communalistic characterization of the Sierra Leonean society, individual achievements are sometimes interpreted as community achievements. This apparently evoked some passion in the people of Newton, Hassanatu's hometown.

The union between Hassanatu a Sierra Leonean and Hycinth a Nigerian, was jokingly referred to by some people as a 'union of Sierra Leone and Nigeria'.

The two met in Virginia, USA, and after a while, Hycinth decided to have Hassanatu, his new found love, in his home.