JONATHAN IN TALKS WITH ATIKU 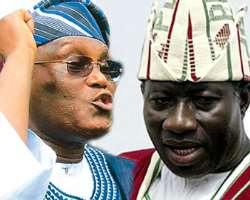 Vanguard learnt that the erstwhile Chairman of the Board of Trustees of the PDP, Chief Anthony Anenih, is mediating the talks between both sides.

The talks are, however, yet to reach a definitive agreement as both parties were reportedly skirting around demands and offers tendered to enable a concrete reconciliation after the most cantankerous presidential primaries in the 12 year-old PDP.

Presidential minders were hopeful, yesterday, that complete reconciliation would further boost the prospects of the President especially in the Northwest where he trailed Atiku in some States.

Meanwhile, the Deputy Governor of Sokoto State and PDP chieftain, Alhaji Mukthar Shagari, said, yesterday, that ongoing religious and ethnic tainted text messages circulating among Northerners to dissuade them from voting for President Jonathan would come to no avail.

He told Vanguard in a telephone interview that the President's good works in reviving the textile industry, dredging the River Niger and the presidential initiative to put Almajiris in schools would boost the President's prospects.

Following his resounding victory at penultimate Thursday's presidential primaries, President Jonathan in his acceptance speech had offered a hand of fellowship to Atiku who he congratulated for putting up a serious campaign.

Dialogue with Atiku
Sources disclosed, weekend, that the President had followed his words with action by initiating dialogue with Atiku. Associates of Atiku were notably reluctant to talk about the ongoing talks.

Vanguard learnt that Anenih was primed to mediate in the talks on account of his closeness to both men. Though Anenih was central to the President's victory in the presidential primaries in Abuja; he is also generally known to have been a close political associate of Atiku running back to the Third Republic when they were both close confidants of the late Gen. Musa Yar'Adua.

Anenih and Atiku reportedly also share common feeling against President Olusegun Obasanjo who they both served and subsequently fell out with.

The aide who spoke of the President's effort to unite the party behind him after the primaries which he contested against the joint forces of Babangida, Atiku, erstwhile National Security Adviser, Aliyu Gusau and Kwara State Governor, Bukola Saraki, added: 'The President is desirous of going into the election as a united team and he believes that it was an internal contest of just the PDP and that is why you would see that the Campaign Organisation for the main presidential election has not taken shape.'

The meetings were equally confirmed by a senior associate of Atiku who responded, briefly that 'yes we are talking, but nothing serious has come out.'

Vanguard learnt that President Jonathan besides offering Atiku a central role in leading his presidential campaign equally offered him four ministerial nominations in a post-May 29 cabinet should the President win the election. Both sides it was learnt are, however, yet to agree on the slots. It is expected that the two camps would come to an agreement as the talks still shrouded in secrecy take a definite turn.

Text messages
Meanwhile, the Deputy Governor of Sokoto State Alhaji Mukhtar Shagari has flayed religious and ethnic tinted text message campaigns against President Jonathan in the Northwest as not representative of the majority of the people of the zone who he said would vote for the President in the forthcoming presidential election.

Shagari in an interview cited the revival of textile companies in the North, the President's initiative against the Almajiri syndrome and dredging of the River Niger as among other issues affecting the North that have endeared true Northerners to the President.

Noting the President's sweeping victory at the Presidential primaries of the PDP, he said the country was now well past the controversy of zoning which he said had been firmly resolved at the national convention.

He noted: 'We believe that the people of the North (are not the) few tiny minority who have been sending around text messages and sponsoring sermons and so on to say that, 'he is a Christian you cant vote for him,' that is a very tiny and small minority.

'What I can tell you is that President Goodluck Jonathan will win the election in Sokoto State, PDP will win elections in Sokoto State and President Goodluck Jonathan will be voted for by Northerners. It has happened in this country before. When the PDP fielded President Obasanjo some people said he is a Christian don't vote for him but Northerners didn't listen to them. When he also came for second term some people also came out and said no, no, don't vote for him, but they didn't listen to that, but they still voted for him.'

'Now, one of the most important issues that is bothering the North is the dredging of the River Niger and the first phase of that has been completed by Mr. President. One of the biggest problems we have in the North is the issue of Almajiris, young little boys who should be in schools but are not in schools. Now, Mr. President has come out with a programme of constructing Almajiri schools where these little boys will be taken and they will be trained and given similar education just like any other child in this country so that we will clear all of them from the streets.

'This is a problem that has bedeviled the North and I believe every northerner will be happy that at least somebody has now found a solution to the problem. I think he is constructing over 100 schools of that nature. I was a witness to the one that is being constructed in Jigawa State. These are some of the real issues.

'So, I believe that with President Goodluck Jonathan, it will be better for this country, particularly the northern part of this country. But you have to understand that it is party politics and in party politics, the other parties will put doubt on you and say we will do this and that.

But that is normal in politics and we welcome that, it makes us to work harder, it makes us to prepare better and it also makes us to feel the thorns in the field, the feelings of Nigerians so that whatever we do in the future will be in the interest of this nation.'