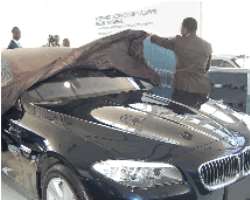 There is a wave of palpable excitement at the Lagos head office of Coscharis Motors Limited and its showrooms nationwide as the marketer of the BMW brand in Nigeria basks in the glory of an impressive global sales record posted by the German premium luxury car maker in 2010.

Checks at Coscharis showed that the BMW Group ended 2010 with its-second best sales result of all time. Sales of BMW, MINI and Rolls-Royce brand automobiles rose 13.6 percent last year to reach a total of 1,461,166 vehicles (previous year was 1.286 million).

The company therefore strengthened its position as the leading provider of premium vehicles. The growth course of recent months continued through December, while sales were 14.2 percent higher than in the same month the previous year, at 141,358 vehicles.

'2010 was a very successful year for us. We are 'spot on' with our new models and are building the cars people desire. We advanced on all continents, in large and small countries alike and continued with a good sales balance between Europe, Asia, and the Americas,' said Ian Robertson, Member of the Board of Management of BMW AG, responsible for Sales and Marketing, at the North American International Auto Show in Detroit.

'Looking ahead, we plan to remain the world's top selling premium automaker and expect sales to climb to over 1.5 million units in 2011, setting new record highs for the Group and its three brands. And while we closely watch some ongoing economic uncertainties throughout the world, we are certain to continue benefiting from our young model line-up with full availability of new vehicles like the BMW 5 Series, BMW X3, BMW X1 and MINI Countryman.'

Daily Sun Motoring was informed at the Coscharis Motors marketing department early in the week, that the management was particularly elated that though the past couple of years were not too rosy in terms of the trend of sales in the Nigerian market, the distributor was able to defy the odds and contribute meaningfully to the reinforcement of the twin-kidney brand's leading position in the premium segment globally.

With a befitting new home for the BMW now opened in Abuja, the new 5 Series recently unveiled, and more new products due for launch in the course of the new year, Coscharis says it is looking forward to being part of BMW's success story at the end of 2011, when the target of 1.5 million units would have been met.

It was learnt that the newly introduced BMW 5 Series and BMW X1 have been very well received. Retail volumes for the BMW 5 Series increased 22.6 percent from the previous year's level to 211,968 units in 2010. The company sold 99.990 BMW X1 vehicles in their first year of full availability.

The flagship BMW 7 Series and the other X-models also continued to be in high demand. Bolstered by strong demand from Asia and the gradual recovery of the American market, sales of the BMW 7 Series climbed 24.9 percent over the course of the year to reach a total of 65,814 units. BMW X5 volumes increased 15 percent to 102,178 units, and 46,404 BMW X6 vehicles were delivered to customers (+11.4 percent).

The BMW Group made sales gains in virtually all markets in 2010. Germany remains the company's largest market: In December registrations increased 16.6 percent to 23,550 vehicles. A total of 266,009 new BMW and MINI were registered throughout the year (+3.1 percent; previous year. 258,069). In a total market that shrank by 23 percent from 2009 levels, the BMW Group was able to expand its market share in Germany by 2.3 percentage points to 9.1 percent over the course of the year. The BMW brand is the only premium brand that succeeded in increasing registrations in Germany in 2010.

In its second-largest market, the U.S., December sales climbed 16.9 percent to 27,600 vehicles, thanks to full local availability of the BMW 5 Series and strong demand for the BMW X5 and X6 models produced in Spartanburg. The BMW Group increased its sales volumes for the full year 2010 by 9.9 percent to 265,757 vehicles. As a result, the company was able to further strengthen its leading market position in North America, making the BMW brand the best-selling European premium brand in the U.S. once again last year.