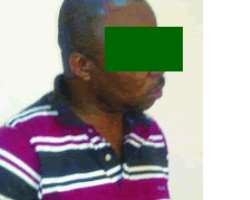 Titus
Is this man a saint or a sinner, a child trafficker-cum-ritualist or a kind-hearted philanthropist that he claims to be?

Whoever or whatever he is, it is now his responsibility to prove. Otherwise, the police who had since put him in cell would have to stamp him with the zeal of a criminal. And he would be left to bear the ugly consequences. Pius Akpan Titus is currently battling hard to free himself from allegations that he is a kidnapper and child trafficker.

The police in Akwa Ibom State say Titus kidnapped five under-aged girls on Sunday evening, took them to his hotel room in Ewet Housing Estate Uyo, and tried to drug them with allegedly poisoned drinks.

Unfortunately for the suspect, one of the girls, a 13-year-old junior secondary school pupil, Esther Okon Effiong, was wiser. She instructed the other girls, some of whom are her blood relations or compound neighbours, not to drink the suspected drugged soft drinks, which Pius and his cohorts brought to them already opened.

As if destined to meet his waterloo, Pius left the girls in his hotel room and drove out and they managed to inform an elderly lady who stays close by. The lady informed the police; and by the time Pius returned, he only drove into waiting handcuffs.

The Akwa Ibom state police commissioner, Mr. Sanni Magaji who paraded the suspect in his office, said Pius was arrested for alleged child trafficking. But Pius who claimed to be a managing consultant to the Ibom Plaza project, a sit-out at the centre of Uyo, said he saw the girls by midnight and decided to help them by picking them to safety in his hotel room.

'I have been seeing stray children like that and I have been helping to take them to safety. That night I called the security to help me take them to safety in my hotel. I'm neither a child trafficker nor a ritualist,' Pius who claimed to come from Essien Udim Local Government area, lamented while kneeling in the police commissioner's office.

He, however, said the security men he called were not the police because by then, the police were not on the road again. Neither was he able to recall any other time that he had helped to take such children to safety as demanded by the police. But the girls picked holes in the suspect's sermon. According to Esther, who became the spokesman for the group, they were abducted by the man and his friends and taken to the hotel around 7 pm.

She said they were no abandoned children but were on errand sent them by their guardian, Edet Efiok only for Pius to accost them and order his men to take them into the car.

Her words: 'In the hotel, he told us that he was the governor's brother. He said whether I would marry him and I said no. He said he was going to buy us new clothes and give us some money. He later went and brought soft drinks that had been opened already, so I told my cousins and friends not to drink it. So we poured it on the floor.

'I told him that we were not orphans. Even one of us who is an orphan lives comfortably with her relations. We live at No. 47, Paul Ekpeowo Street. After he tried everything and could not succeed, he went out this morning and we told one woman our problem and she called the police.'

The police said after due investigation, the suspect, who claims to be living at No. 15, Udo Abasi Street would be charged to court.