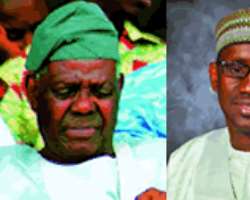 •Akande & •Ribadu &•Bafarawa
The genesis
The time table released by the Chairman of the Independent National Electoral Commission (INEC), Prof. Attahiru Jega, slated party primaries for between December 2010 and January 15, 2011.

And the National Publicity Secretary of the Action Congress of Nigeria (ACN), Alhaji Lai Muhammed told newsmen in Lagos that 'the ACN primaries will come up after the National Convention slated for Edo State on Thursday, December 16, 2010.'

That was before the death of the wife of Edo governor, Mrs Clara Oshiomhole whose burial on Friday, December 17 pushed the National Convention to Tuesday, December 21, 2010, in Benin City, Edo State capital.

Against this backdrop, the party had just three weeks to conduct the primaries to elect its flagbearers at wards, local, state and federal levels. Of interest to a lot of faithfuls and political watchers are the presidential and governorship candidates in some states where elections will hold in 2011.

After successful outings during the congresses across the wards, local government and state levels, the leadership of the party put their acts together and fixed Friday, January 14, 2011 for its special convention, through which the presidential candidate of the party would emerge.

Presidential level
As at the time the National Convention date was fixed by the party leadership, about four aspirants have signified intention to contest on the party's platform. They were the former National Secretary of the party, Dr. Usman Bugaje, the former Chairman, Economic and Financial Crime Commission (EFCC), Mallam Nuhu Ribadu, one time National Chairman of the party, Ambassador Mamman Yusuf. Former Sokoto state governor, Alhaji Attahiru Bafarawa, who was a presidential candidate of the Democratic Peoples Party (DPP) decamped from the party he formed having left the All Nigeria Peoples Party (ANPP) and joined the ACN on which he also aspired to be President. Later came a new comer, Mallam Saidu Malami from Nasarawa State into the race.

Ribadu, on his own joined the ACN after his arrival from exile. And all the aspirants had left nobody in doubt that they meant real business as they went about canvassing support for their individual aspiration.

However, the vocal and courageous former EFCC boss, Ribadu, who has been going round the country to sell himself and his ambition to the people has also been expressing confidence that with his pedigree and antecedents, he would win the race if it is free, fair and credible.

In what appeared like 'charity begins at home,' Ribadu stormed Adamawa State, where he hailed from to tell his kinsmen why they should vote him as 'the ACN presidential candidate in 2011.'

However, pundits have been weighing the chances of all the contestants against their political backgrounds. Bafarawa was adjudged as the more politically matured and experienced since he has been governor for two terms in Sokoto State. Ribadu, on his side, was seen as young, clean, dynamic without credibility crisis but with lack of political experience.

Nigerians needed not to wait for long to know who would clinch the party's ticket to fly the party's flag in the April general elections as the party primary has come and gone and a winner has already emerged.

The convention
As early as 7.00 a.m, the mainbowl of the Onikan Stadium venue of the convention has started witnessing the influx of party chieftains, party delegates, supporters, well wishers as well as the presidential aspirants themselves all gaily dressed.

Others included both former and incumbent governors of the party like Babatunde Fashola (SAN) of Lagos, Adams Oshiomhole of Edo, Rauf Aregbesola of Osun, Kayode Fayemi of Ekiti, as well as Dr. Cris Ngige, Aremo Olusegun Osoba, Otunba Niyi Adebayo and Osun and Lagos Deputies Governor, Titilayo Laoye-Tomori and Sarah Adebisi Sosan among others.

Praise singers, talking drummers, acrobatic dancers and cultural dancers were also on hand to entertain the august gathering that comprised the politicians, civil society groups, officials from the Independent National Electoral Commissions (INEC), as well as observers from other parties, particularly the Congress for Progressive Change (CPC).

The presence of the CPC delegation reinforced the belief that the much touted alliance talks between it and the AC N were very much in progress.

The election proper
The Convention Committee Chairman, Senator Lawal Shuaibu while welcoming the delegates to the venue described the convention as 'another milestone in the history of our great party and dear nation.'

He said the party members were united by the common motive of winning the April general elections and wrestling power from the ruling Peoples Democratic Party (PDP).

While reiterating his party's determination to rule the country from the centre this year, Shuaibu added that 'we believe in democracy for justice , urging the members to cast their votes and wait until their votes were counted.

But before the election proper could commence after the opening prayer offered by the Lagos State Publicity Secretary of the party, Mr. Joe Igbokwe, it was noticed that only three aspirants were conspicuously visible while others seemed to have dropped out. Daily Sun learnt that Dr. Usman Bugaje has opted for the House of Representatives while Ambassador Yusuf Mamman was said to have stepped aside long time ago.

However, there was a dramatic change of scenario when the aspirants were given ten minutes each to canvass for delegates votes.

Former Governor of Sokoto State, who stepped out first chose to step down for Mallam Nuhu Ribadu, claiming that aspiration to serve the people 'is not a do-or-die affair.' Saidu Malami, who dazzled the distinguished audience with his oratory prowess, also cited interest of the party as his reason for stepping down for Ribadu.

Describing himself as 'the dark horse and ordinary Nigerian,' he expressed his readiness to support and co-operate with whoever emerged as the party's flag bearer.

The development now prompted the Deputy National Chairman, Alhaji Murphy to move a motion for confirmation of Ribadu candidature in line with the party's constitution and Section 6 of the Electoral Act. The motion was promptly seconded by the National Legal Adviser, Dr. Muiz Banire.

Handling over the party flag to Ribadu, the Chairman of the occasion, Chief Bisi Akande described him as 'new face of the new generation worthy of overwhelming support of the women and the youth across the country.'

He therefore lamented that Nigeria was better than what it is today about five decades ago and called on the youth to salvage the country saying 'the time is now.'

The elated Ribadu, while colleting the flag express appreciation to the aspirants that stepped down for him, promising that 'change is already in the air.'

Ribadu who promised 'never to betray the confidence and trust reposed in me by the elders and members of the part,' said 'I humbly accept the challenge with utmost sense of responsibility.'

He thereafter lambasted the PDP administration for bad government regretting that 'democracy has deserted the party.'

Facing the delegates Ribadu pledged: 'With your permission, I will be the one to carry the flag. I am ready to to work. I will do it with fear of God, humility and respect.'

In their own goodwill message at the events, the ACN governors, who urged the people to register en masse for the coming election was of the strong conviction that 'this is the right time to sweep out the non performing PDP government out of office.'

The governors saw the emergence of Ribadu as celebration of possibility of new Nigeria the patriots have been struggling to achieve, saying Ribadu emerged to rebuild, regenerate and recreate Nigeria.

Ribadu will now have other candidates from other parties to contend with come April. Notable among them are General Mohammadu Buhari of the CPC, Mallam Ibrahim Shekarau of the ANPP, Prof. Pat Utomi of the SDMP, Alhaji Rasheed Shitta-Bey of the MPPP, Dr. Chris Nwaokobia of the LDPN, Chief John Dara of NTP, Chief Dele Momodu of NCP, and Reverend Chris Okotie of FDP among other contenders.

Side attractions
As the convention was progressing, there were intermittent sloganeering and singing of praises of party leaders, party candidates as well as display of posters by supporters of candidates who have emerged during the various congresses to contest various offices in April.

The show of solidarity was not however free of charge as some politicians whose praises were song coughed out some coins to show appreciation for the praise singers efforts.