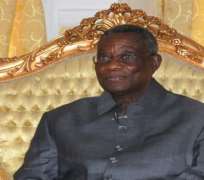 Whatever others may make of him, John Atta Mills continues to see himself in the mirror of Pan-Africanism, a philosophy that seeks cultural, political and economical unity of Africa. From his teaching years at the University of Ghana to his political and social life, Mills is actuated by a lofty Pan-Africanism vision.

Pretty much of this he draws from his political hero Kwame Nkrumah, the first President of Ghana (in office from 1957 to 1966). The examination of Mills’ Pan-Africanism vision was in display at the on-going Cote d’Ivoire political crisis. After agreeing with his fellow leaders at an Economic Community of West African States (ECOWAS) meeting in Abuja to intervene, if push comes to shove, militarily in Cote d’Ivoire to install the dully democratically elected Alassane Ouattara against the intransigent Laurent Gbagbo, the incumbent who lost the presidential elections and is resisting to vacate the presidential seat.

Mills’ u-turn on an Ecowas agreed probable plan to use military intervention against Laurent Gbagbo makes his Pan-Africanism vision suspect in the face of actual African democratic test. This isn’t surprising: Mills democratic roots are shallow and his conversion to democracy recent. Unlike Nana Akufo Addo, presidential candidate of the main opposition National Patriotic Party, Mills isn’t known as democracy struggler. For long, he was a Marxist-Leninist with no believe in democracy. Mills is yet to couple his Pan-Africanism of yesteryears with Ghana’s and Africa’s fast developing democracy of today.

Mills expected misreading of the struggles for Cote d’Ivoire’s democracy isn’t surprising: at issue isn’t the sovereignty of Cote d’Ivoire as an abstraction but the practical democratic order of Ivorians, and by extension Africans, who have suffered under tyrants like Laurent Gbagbo. The enshrinement of democratic agreements in the Ecowas and the African Union charters is as a result of Africa’s painful political history where the likes of Laurent Gbagbo have brought their countries down.

Mills’ judgment that Ghana’s military is over-extended and that sending some to a probable Ecowas authorized force would endanger Ghana is unPan-Africanism. It smacks of amateurism, weak philosophical understanding of Pan-Africanism as the foundational pillar of Ghana’s and Africa’s development, and a Mills who is unstable when it comes to the actual Pan-Africanism challenges. Kwame Nkrumah would tell Mills that it was Pan-Africanism, as the philosophical basis of Africa’s progress, that made Ghana lent Guinea-Conakry US$10 million during its hurting trial when it opted for its independence from France colonial rule in 1958.

Still, despite its own internal security challenges, even Nigeria’s late President Sani Abacha, who was viewed in African political circles as an appalling leader, comes out as a better Pan-Africanist than Mills when Abacha send Nigerians troops, under Ecowas, to clear out the murderous Armed Forces Ruling Council junta in Sierra Leone in 1997 and again in 1999 that had overthrown the democratically elected President Ahmed Tejan Kabbah. Sierra Leone is today one of Africa’s emerging democracies and as a result has improved from the bottom of 167th to 158th position on the United Nations Development Index that measures globally human well-being.

Democracy may be fairly new in Africa but its growth and maintenance is a work in progress sometimes needing both diplomatic and military enforcement, sometimes taking unpleasantly painful decisions and actions. Cote d’Ivoire is the latest case but Mills doesn’t get. European and other developed countries democracies have come in this way. And so part of the philosophical drive of today’s Pan-Africanism is enriched by Africans coming to the excruciating conclusion that their democracy, born out of agonizing experiences, is better for their progress than the dictatorial military juntas and autocratic one-party systems of yesteryears.

At best Mills should have refrained from editorializing about Ghana’s place in Ecowas when military intervention becomes necessary and postpone any policy changes with his Ecowas leaders. By back-stabbing his fellow Ecowas leaders in public, Mills has proved to his adversaries that he is politically immature, has feeble cultural grasp of Ghana and Africa, and has poor hold of the Pan-Africanism philosophy that is to spur Africa, especially of the forces such as Laurent Gbagbo that have been stifling the continent’s progress. Mills has also removed Ghana from participating in Africa-wide discussions of democracy as the best solution to the continent’s numerous development challenges.

To Mills, Cote d’Ivoire’s democratic problems are their business and Ghana doesn’t care. That’s jaundiced Pan-Africanism. That also makes Ghana touted as the leading light of Pan-Africanism garbage. In Cote d’Ivoire, Mills’ long-held view that he draws his Pan-Africanism inspiration from Kwame Nkrumah isn’t true against the realities on the ground. While Nkrumah invoked Pan-Africanism to help Guinea-Conakry, Mills is on the opposite line, telling Ivorians “this is your internal affairs, I don’t care about you.”

In Mills, Ivorians aren’t from the African family and do not exemplify the best in Africa. And yes Mills has no empathy for Ivorians in the face of the mindlessly autocratic Laurent Gbagbo suffocating them to death.