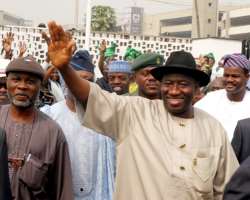 Recall that there are a couple of cases in court surrounding Nwodo’s return to the PDP following a waiver he received from the NEC which allowed him become party chairman.

The President, who spoke to reporters at the Presidential Wing of the Murtala Mohammed Airport Ikeja, said the litigations were too important to be ignored especially when the party is in the process of submitting the names of its candidates for the 2011 general elections to the electoral commission.

“Nwodo is still a senior member of the PDP, but we feel that there is too much litigation. The party is tired of these multiple litigations and does not want to be dragged into all these,” Jonathan said.

Meanwhile, the letter submitted by the Deputy Chairman of the PDP, Dr Haliru Mohammed Bello to NEC which forced the motion to expel Nwodo from the PDP reads:

“NEC would recall that the Special National Convention of our great party for the next election of the presidential candidate of the party took place on 13th January, 2011.

“However, in the course of the convention, Dr. Nwodo appeared and claimed that the injunction had been vacated whereas this was not so. The National Chairman, fully aware that the court order had not been vacated, attempted to forcefully preside over the convention.

“This led to an embarrassing situation to the chagrin of Mr. President, Vice-president, National Working Committee and other top party leaders, the delegates and the international community who were watching.

“The action of Dr. Nwodo dragged the party into disrepute contrary to Article 21(1) c and h of the PDP constitution. In reaction to this development, the South East caucus has passed a vote of no confidence on Dr. Nwodo asking him to resign and asked the NEC to invoke necessary and relevant sections of our party’s constitution to remove him from office, if the call on him to resign fails to materialize.

“NEC is accordingly invited to take appropriate disciplinary action on the National Chairman in keeping with Article 21.12 of the party constitution.”