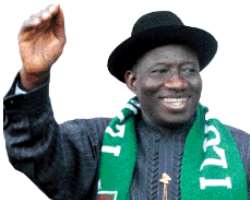 
President Goodluck Jonathan would in the next few days hold a series of meetings with elder statesman, Adamu Ciroma and his group, the Northern Political Leaders Forum (NPLF) as well as his closed rival in the just concluded presidential primaries of the party, Alhaji Atiku Abubakar.

The move, Sun Sunday gathered, is to resolve the rancour that is threatening to tear the Peoples Democratic Party (PDP) apart. The meeting is also targeted at massaging the ego of all those who belong to one camp or another, who felt marginalised, insulted and hurt by recent developments in the party.

President Jonathan in his acceptance speech after winning the presidential ticket at the party's special national convention in Abuja declared: 'This mandate is unique as it makes a decisive statement in the history of our great nation. The statement is that our people have chosen the unity of our country above all other considerations. I promise all Nigerians that I will do all within my power not to disappoint this umbrella of unity you entrusted on me today (Friday)'

'This victory is not for me alone. It is not just Sambo and our supporters in PDP. It is the victory of PDP leaders and indeed all Nigerians because it takes us closer to the Nigerian dream of our national transformation.' He also paid tribute to both Atiku and Mrs Sarah Jubril for fighting gallantly and had invited them on board, stating 'together we can build a Nigeria of our dream.'

But fielding questions from State House Correspondents yesterday, the Special Adviser to the President on Media and Publicity, Ima Niboro, said the President has put his victory at the primaries behind him, as it was not personal to him but for the PDP and all Nigerians.

According him, while the President remains grateful for the overwhelming support he has continued to enjoy from party men and woman and indeed Nigerians so far, his immediate pre-occupation now was to heal every perceived political wound and injury inflicted or sustained preparatory to the primaries, as part of his promise to unite the PDP and Nigeria.

'The process of healing has begun already. The President is reaching out, aiming to bind wounds inflicted during the campaign before the primaries. Of course there will be a series of meetings, and we hope that at the end of it all, we would have united everyone for the contest ahead. For us, there is no victor, no vanquished. You can quote me,' Niboro said.