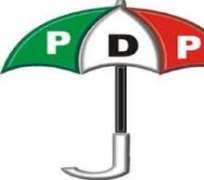 The recently concluded Peoples Democratic Party (PDP) Primaries in Delta state for aspirants into the State House of Assembly, House of Representatives and Senate conducted in the state have been smeared with machinations even as the electoral panel set up by the National Executive Committee of the PDP to conduct the party primary elections released its provisional result amidst tension.

The results as announced by secretary to the committee, Dr Lawrence Ezenwa, were classified as unconstitutional by the Delta state executive of the PDP which claimed not to have yet verified the results of the primaries.       The state chairman of PDP, Barrister Peter Nwaoboshi, who described the primaries as flawed claimed that   it did not emanate from the Delta State PDP and that those results, not declared by the party is of no effect.

Ezenwa's committee had alleged intimidation and bribery from some very powerful politicians in the state, resulting to their forced exit from the government quarters.         'We have to be stampeded out of the Government Lodge by the activities of the State party Exco to the extent that we were invaded and we have to be forced out; sincerely it is because of the result of this panel. Every single effort that was being made to frustrate us   but out of our own persons conviction we stood our ground to make sure that we get this thing done properly no matter whose ox is gored'.

A statement personally signed by Nwoboshi stated that, 'I wish to draw the attention of the National Chairman of the PDP, the National Executive Committee, the National Working Committee, the entire PDP family in Delta State and the general public at large to the largely flawed primaries without the use of the authentic delegates list in most of the constituencies in Delta State.   'Most importantly, the purported Delta North senatorial primaries held at the Delta State Cenotaph, Asaba in the night hours of 11th January, 2011 is illegal, null and void'.

According to Nwaoboshi, 'the said caricature primaries was concocted, cooked and crafted by disgruntled elements who have engaged in the illegal primaries to save face, having failed to secure victory in the just concluded primaries and have chosen instead to deceive party members and loyalists with the charade.   'The purported primaries is illegal, ultravires and unconstitutional as the same is held without the consent, authority and mandate of the hierarchy of the party in Delta state.'   For the modest politician and former Secretary to Delta State Government (SSG), Dr. Ifeanyi Arthur Okowa who won the Delta North Senatorial District primaries with 942 votes against all odds, beating Mariam, wife of former National Chairman of PDP, Ahmadu Ali who got a paltry 18 votes, it is not yet 'Uhuru' as a fight has just begun.   Although it has been feared in some quarters in Delta North that Okowa's victory or of another aspirant, except that of Mrs. Ali could be upturned following undue influences of some 'godfathers' at the upper echelon of the party, it has now become clearer to those who doubted Governor Emmanuel Uduaghan's earlier call on Okowa to step down for Mrs. Ali, alias Enyi Kpakpando.

Meanwhile, media director to Ned Nwoko, Prince Clement Okonjo had decried the style adopted for the conduct of the PDP Senatorial primaries, alleging that 'the inverse in allowing the governorship primaries hold before that of the senatorial aspirants was a ploy to allow the governor control delegates to senatorial primaries'.   Prince Ned Nwoko, a former member of the House of Representatives (Aniocha/Oshimili Federal Constituency) had scored 78 votes at the said primaries; while Nduka Nwoye scored two votes. But Dr. Cairo Ojougboh, also a former member of the House of Representatives (Ika Federal Constituency) had closely followed Okowa with 286 votes.

Recall that the governorship primaries in Delta state where Dr. Emmanuel Uduaghan emerged as the Peoples Democratic Party (PDP) candidate for the forthcoming April 2011 general elections was marked with controversy as a faction of the PDP under the loyalty of former Information Minister, Chief Edwin Kiagbodo Clark also elected Professor Saliba Mukoro as its consensus governorship candidate in the April general election.   While the state party Chairman, Peter Nwaboshi, was organizing the governorship primaries in Asaba, Clark held its parallel primaries at the Mid-West Inn, Enerhen, near Warri.   This new trend, according to sources said that Governor Uduaghan and Mukoro are up within the PDP as candidates adding that the discrepancy would be resolved at the national headquarters of the party.

'The National Secretariat is aware of the parallel executive of the party in the state because I picked my intent form from the national exco in Abuja and not Asaba so they are aware we are conducting our primaries here'.