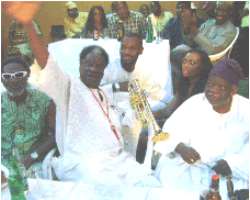 It was an evening of fun, and a gathering of music icons at the 80th birthday concert in honour of Dr Victor Olaiya, popularly called Evil Genius of Highlife. The Stadium Hotel venue in Surulere area of Lagos provided a rallying point for Olaiya's colleagues, particularly his fellow Highlife singers who came to celebrate with him upon joining the league of octogenarians.

Shortly before the concert, Ambassador Olusola who was chairman described Olaiya as a rare musician who combine talent with skill. He recalled his days at the Western Nigerian Television in Ibadan, when Olaiya was a force to reckon with in the growth and development of Highlife music. Olusola also congratulated Olaiya for attaining the ripe age of 80, and urged the guests to pray for him live longer.

While proposing the toast, Benson Idonije, music critic and analyst gave two reason for celebrating Olaiya at 80. First, the music legend was lucky to have lived long, unlike many of his colleagues who died young. Secondly, Olaiya's relevance to the growth of Highlife music is legendary, as he was one of the pioneers of the music genre, having established his band as far back as 1954. Also while the late Bobby Benson was acknowledged as the father of Highife, Olaiya remains the father of popular music in Nigeria.

Idonije also recalled how Olaiya made Highlife popular in the country, and how he gave Nigeria an edge over Ghana, when compared to the late E.T Mensah's music. Olaiya was equally commended for having influenced many of his younger colleagues, including the late Afrobeat legend, Fela Anikulapo-Kuti. Following Idonije's speech was the celebrant who gave a stint of his music after a short address. Olaiya joined his band to sing a number; Aya Mi o, to which the dignitaries responded warmly by trooping to the dance floor.

Olaiya expressed his gratitude to all present, noting that in the past, musicians like him were engrossed with the struggle for supremacy, hence they often clashed and eventually fell apart. But the media, particularly TV and Radio, played a significant role in harnessing talents and promoting artistes like him in the 50s and 60s. As a result, Olaiya underscored his joy as an octogenarian, adding'' As young man of 80, today is one of the happiest days in my life''.

Following this, the birthday cake was cut by Olaiya, with some of the guests joining in the exercise. The floor was declared open and members of the Evergreen Band took over from Victor Olaiya's band. First to perform was Orlando Julius who thrilled with his evergreen;Jaguar Nana, while backing it up with trumpet. Orlando's show was boosted by his wife, Latoya, whose dancesteps became all the more scintillating.

After Orlando was Pa Rolling Dollar who used his popular number, Won Kere Si Number, to eulogise Olaiya, while entertaining the guests with his stagecraft and suprano. Others who thrilled the audience in honour of Olaiya include Alaba Pedro, Yinka Davies and Tee Mac on flute.The Evergreen Band was particularly a delight to the guests as it entertained them with saxophone and trumpets, while rendering vocals to reminisce on such highlife numbers as Olaiya's Bisi, Ololufe Mi, Fela's Ekuro Lalabaku Ewa, among others.