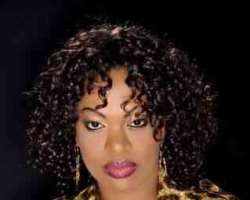 It was a celebration of life mixed with strong emotional grill of “We would miss you Jeye” on Tuesday 11 January 2011 in Lagos as Jeye Okorodudu, husband of top Lagos designer, Data Okorodudu was buried in Lagos. Data runs JD7, one of Nigeria's most sought after designers.

We gathered that leading Nollywood actresses such as Genevieve Nnaji, Rita Dominic and Ini Edo are some of those who usually adorn the designs of JD7 by Data Okorodudu.

As part of Jeye Okorodudu's painful final departure, a memorial service was held for him at the Church of Assumption in Falomo, Ikoyi.He was later buried at the Vault Private cemetary, Ikoyi. Genevieve Nnaji, Betty Irabor and other top Nigerians were at the service to support other friends and family members of the daparted.

Jeye died of Cancer in December 2010. He studied economics at the University of Lagos. He was passed through the Chief Executive Management programme of the Lagos Business School. He was the CEO of Adata Group. He had business interest raging from oil and Gas,telecommunication to Banking. He was one of the directors of NNB International Bank. Jeye was also actively committed to the Lagos Energy project before his demise.