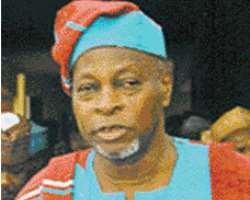 Former Secretary to the Federla Government and Minister of Finance, Chief Olu Falae, has said that neither President Goodluck Jonathan nor former  Vice President Atiku Abubakar is good enough to be elected by Nigerians to take charge of the country.

Falae told Daily Sun in Akure that the two aspirants on the platform of the Peoples Democratic Party (PDP) uld not save the nation from its present state of economic doldrums and maladministration.

The National Chairman of the Social Democratic Mega Party(SDMP), specifically said Jonathan and Atiku are not the kind of leaders needed by Nigerians, who have been ruled by people who are self centred and focus-less.

According to him, the few months spent in office by Jonathan have not been impressive and encouraging: The duo of Atiku and Jonathan cannot save Nigeria from its present state, they cannot address the multifarious problems facing the country. Jonathan, in any case is too close to Obasanjo for comfort and Obasanjo is bad news for Nigeria.

Jonathan has not impressed me. As an incumbent, we fought for him to be recognised as Acting President because that was the correct thing that time. But since he became the President, I have not been impressed.

'Atiku Abubakar was Vice President to Obasanjo. He left the party for Action Congress (AC) and the party became another PDP extension. So, PDP, or no PDP, I am not interested in Atiku'. When asked whether he would root for former military President Ibrahim Babginda if he dumps the consensus arrangement, Falae said: 'I will not support anybody that is not a member of my party. I am not interested in his ambition.

'I am the leader of Social Democratic Mega Party , But if IBB joins the party and he  wants to aspire in that party, of course , he will be allowed like every  other person to aspire and I am not going to do anything to favour or hinder his ambition'.

The former Finance Minister also expressed doubt over the conduct of the 2011 general elections, stressing the time table released by the Independent ElectoralNationalCommission (INEC) was not visible.

He pointed out that with the present situation of things, it was sure that the electoral body would not meet the target of giving the nation free and fair polls as anticipated by Nigerians.

Falae  also criticised the jumbo pay being received by lawmakers, saying, both members of upper and lower chambers of the National Assembly are bunch of jokers in Abuja that are looting the nation's treasury with the connivance and support of the executive: 'The jumbo pay issue is a sad commentary on the state of the nation. It shows that the leaders don't care, they lack morality, their conscience is totally dead.

'These have discredited the legislature and put to question the legitimacy of the so called leaders that we have at the national level'. He suggested a system that would make legislative business part-time in nature, so that do-or-die politicians would not hijack the nation's polity. The elder statesman said not until legislative duties are made less attractive and on part-time basis, genuine people who want to serve the nation would not be given opportunity to serve by desperate politicians.