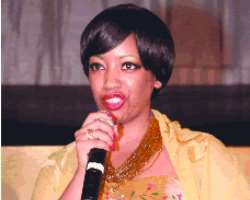 Soraya
It was a show of fashion and style at City People's Fashion and Style Award. The 6th edition of the awards which held at Anchor Events Place, Agidingbi, Ikeja, was attended by top celebrities who were dressed in glamorous styles. The event could also be described as a gathering for fashion and style icons.

There were different categories of awards to those who have contributed in one way or the other to the growth of fashion industry in Nigeria.

Style writers were not left out. The Style Editor of the year award was won by Omoyemi Akerele of Flair West Africa, while the Fashion Writer of the year was by Lathasha Ngwube of Thisday Style.

The Most Supportive Company of the year went to Daviva and Twice As Nice became the Most Outstanding Fashion Boutique of the year in Clothings.

Also, former beauty queen, Omowunmi Akinnifesi clinched the award for the Most Stylish Woman of the year.

The Hottest Designer of the Year (Man) was Bashy Kuti and Makeup Product of the Year- H.I.P.