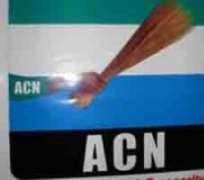 It's False, Says Jonathan's Group
FOR the second time, the Action Congress of Nigeria (CAN) yesterday raised an alarm over plan by the ruling party, the Peoples Democratic Party (PDP) was planning to incarcerate its national leader and former governor of Lagos state, Bola Ahmed Tinubu ahead of the general elections.

The party also decried what it called the growing desperation of the PDP and President Goodluck Jonathan as the general elections approach pointing out that if the PDP aspirants can go for each other's jugular in an intra-party campaign, they will probably take the campaign a notch higher when they confront candidates from other parties in the elections.

But the Goodluck/Sambo Campaign Organisation has denied the allegation by the ACN saying the organization frowned at the recent penchant by politicians to broadcast total fabrications in the garb of revelations.

According to the statement by the director of media and publicity, Mr. Sully Abu, the alarm on the alleged plot to kill Tinubu was a ploy  'to pile up one lie over the other with the hope that something murky would stick.'

Addressing a press conference yesterday, the national publicity secretary of the party, Alhaji Lai Mohammed said those behind the plot to put Tinubu behind bars have been meeting across the country saying the plot was directed at stopping the putative alliance between the ACN and CPC which is capable of ending the misrule of the PDP.

He said concerning Tinubu, the actual intention of those behind the plot is to end his life pointing out that 'mere arrest for whatever reason may seem innocuous and routine, but it is just the first step'

He added: 'Their plan is to ultimately give Asiwaju Tinubu, while in detention, the Yar'Adua or Abiola treatment' stressing that they do not intend to let him return home alive.

On why the PDP was after Tinubu, Mohammed said the CAN was growing in leaps and bounds saying as the party fortunes rise, the prospect of the ruling PDP becomes dimmer by the day.

'As the 2011 general elections approach, it is becoming increasingly clear that we are the toast of all Nigerians seeking better governance and the deepening of democracy.

'But there is more to it, Tinubu is seen as the architect of PDP's deconstruction. And he has to be stopped at all cost. Whatever may be the reason for his impeding arrest is a smokescreen. What offence could he have committed that has taken the authorities almost four years to seek his arrest? Is this coincidence in timing between the arrest and the forthcoming general elections not striking?' he asked.

The ACN spokesman maintained that the increase in fortunes of the party, particularly, the recent inroads it has made to four states with notable PDP members such as Senator James Akpanudoedehe, Ifeanyi Ararume, Former Governor Achike Udenwa, dr Abiye Sekibo, former Governor George Akume, former Governor Saminu Turaki and Senator Joel danlami joining the party, the CAN has become the party to beat in the general elections.

On the alleged desperations of the PDP and the president, Mohammed stressed that Jonathan has been convinced by the hawks in his party that he either wins the presidency or the nation's democracy is truncated.

He pointed out that the signs of the growing desperation of the president manifested in the N3 billion allegedly contributed by six PDP state governors to his campaign fund even in the face of the fact that roads have become more impassable and hospitals were not up to consulting clinics.

'Also, $1 billion have been secretly and hurriedly shared out to the states from the excess crude oil accounts, just to secure support for president and give his backers the necessary war chest needed to fight ahead of April's election', he said.

He, therefore, called on Nigerians to speak up and do everything within their power and in accordance with the law to stop those who were bent on either having their way or truncating the democracy.

'On our part, we will not sit back and fold our arms while those who fought for democracy we are enjoying today are demonized and decapitated.

'We will not allow those who are were mere cheerleaders when the likes of Tinubu were in the trenches to now bring down the house over everyone just to have their way,' he concluded

Abu described Mohammed's allegations as similar to Alhaji Atiku Abubakar's  'tissue of lies', wondering under what financial sub-heads the monies allegedly taken from states' coffers would have been released.

'The problem with some politicians is that they imagine that others are as corrupt and desperate as they are,' said Abu.

He called on the security agencies to investigate Mohammed's 'outrageous claims,' that '1 billion dollars have been secretly and hurriedly shared out to the states from the excess crude oil accounts, just to secure support for President Jonathan and give his backers the necessary war chest needed to fight ahead of April's election.'