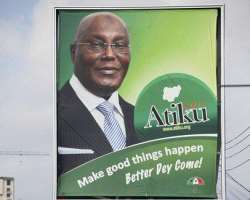 Witches and wizards in the country have advised former Vice-President Atiku Abubakar to withdraw from presidential race or risk being humiliated at the Peoples Democratic Party's (PDP) primaries. The National Co-ordinator, Witches and Wizards Association of Nigeria (WITZAN), Dr Okhue Iboi, told Daily Sun in Lagos that Atiku would be disgraced during the PDP national congress.

“Atiku should withdraw now if he loves himself. He would be humbled by President Goodluck Jonathan. If he withdraws now, it will be a saving grace for him, but if he insists on going ahead with the primaries, that will be the end of his political career.
“During our emergency meeting to deliberate on the state of affairs in Nigeria, it was clearly revealed to us that the days of Atiku's relevance in Nigeria's politics are over.

He is just wasting his money, energy and resources. His campaign is in vain. His fate is already sealed. He is going nowhere. The era of his relevance in Nigerian politics is over. He should forget the idea of becoming Nigeria's number one citizen, either now or in the future.

“About six months ago, long before General Ibrahim Babangida decided to enter the race for PDP's presidential ticket, witches and wizards told him that he was wasting his time. We told him in clear terms that he would never secure PDP ticket, and that he would drop by the wayside. This was reported by some national dailies. What eventually happened to IBB? He was humiliated. He who has ears, let him hear very well, witches and wizards do not double-speak. We are messengers from the spiritual world, and anybody that disobeys us, is doing so at his own risk.

“When we warned Babangida to stay away, that he was going nowhere, some of his agents told us that we are fake witches. That Babangida has other witches praying for him to win PDP's ticket. From what happened to Babangida later, we now know who are genuine and fake witches.

“Witches and wizards are also stakeholders in the project called Nigeria. This is why we held this emergency meeting to look at the state of our nation, Jonathan will win. All other candidates will be defeated. But Jonathan should be very careful. He should also look for ways to address the present state of insecurity.

“Jonathan's victory is assured and sealed in the spiritual world, but he will face many challenges. He should not be afraid. He will conquer his opponents. Witches and wizards are praying for this nation. We wish Nigeria well, but what has been revealed to us in the spiritual world is alarming. As Chief Tony Anenih said recently, there is no vacancy in Aso Rock, Jonathan will win, but there will be bloodshed in some states.

“Oyo State will be on fire. Governor Adabayo Alao-Akala will face serious challenges. The state will be too hot for him. If Akala is not careful, the situation in Oyo State will be so volatile that he might run away. Enugu, Benue, Kano, Katsina, Akwa Ibom states will also be hot. There will be an increase in political assassinations. Nigerians need to pray fervently to avert bloodshed that will rock this nation to its foundation.

“The way some people look at witches and wizards is as if we are evil-minded people. Not all witches are bad. Our own type of witchcraft which we practise is a progressive one. The day government and other stakeholders invite us to intervene in the affairs of Nigeria, we will gladly do so. We have the antidote to bring lasting peace to this nation. Nigeria is a great country, witches and wizards can help restore its lost glory.

“We saw June 12 crisis long before it happened, and we warned the late Chief M.K.O. Abiola, but he ignored us. Abiola would have been Nigeria's president, but some of us decided to punish him over the role he played in scuttling the late Chief Obafemi Awolowo's presidential ambition. We warned him in the same national dailies not to waste his time and life, he ignored us, look at what happened to him. Witches and wizards also dealt with Sani Abacha for ordering the execution of Ken Saro-Wiwa.
“We sealed Obasanjo's fate in our coven.

We not only sent emissaries to him at Ota not to toy with the idea, we also warned him that the plot would fail if he failed to heed our advice. Many newspapers carried our message, warning him, he ignored, but everybody knew what happened later.”