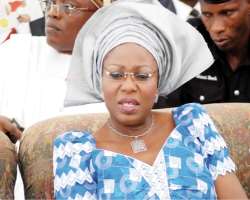 LAGOS, Jan 06, (THEWILL) – One of these persons will be chosen as running mate to Lagos State Governor Babatunde Raji Fashola (SAN) in the 2011 general election.

They are: Chairman of the House of Representatives Diaspora Committee, Hon. Abike Dabiri-Erewa; Lagos State Commissioner for Women Affairs and Poverty Alleviation, Mrs. Adejoke Orelope-Adefulire and her colleague in the Ministry of Science and Technology, Dr. Babafemi Hamzat.

This scoop is coming a day after Fashola was endorsed to contest the governorship race on the platform of the Action Congress of Nigeria (ACN). His deputy, Princess Adebisi Sarah Sosan did not get the party’s endorsement thus fueling talks that she will be dropped from the ticket. THEWILL gathered that Fashola had made a case for Sosan’s return on the premise that both have had a robust relationship, short of conflict since 2007 when his administration came on board. It was further gathered that Fashola’s endorsement was considered on the condition that Deputy Governor Sosan will be dropped to pacify other party interests who have had an eye for the slot.

Top on the list is the Commissioner for Women Affairs and Poverty Alleviation (WAPA), Mrs. Adejoke Orelope-Adefulire, who according to a source is highly favoured to replace Sosan. Also on the list is a top broadcaster and current member of the House of Representative representing Ikorodu Federal constituency, Hon. Abike Dabiri, who has been linked to have pushed for Fashola’s return as the ACN candidate.

THEWILL further gathered that Orelope-Adefulire is the party’s preferred replacement for Sosan who is rumoured to be nursing a Senatorial ambition in the 2011 election to represent Lagos West senatorial zone. “I can tell you authoritatively that Sosan is not going to be Fashola’s deputy come 2011 elections. Adejoke Orelope-Adefulire is highly favoured in the party ranks to replace her. “Sosan has paid her dues and has served the present administration effectively and the decision to replace her is not connected to non performance but her quest to vie for a higher level of service,” our source said.

Meanwhile, some members of the State Executive Councils with political ambitions are expected to tender their letters of resignation soon in line with the Independent National Electoral Commission (INEC) guideline for serving officers. Those in this category include Commissioner for Information and Strategy, Comrade Opeyemi Bamidele, his counterpart in Rural Development, Prince Lanre Balogun, Special Adviser on Transportation, Comrade Kayode Opeifa and his counterparts in Rural Development and Central Business District, Paul Kalejaiye and Oyinlomo Danmole. They have all signified interest to run for different political offices.