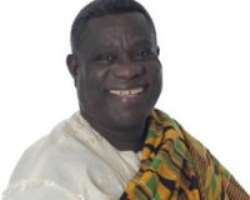 BARRING any unforeseen circumstances, Ghana, will this week, ship its first oil from its Jubilee oil field, which was put on stream few weeks ago.

The country, has however, strategised against the commodity being a 'curse resource', by ensuring that unlike the situation in Nigeria, the host communities are favoured in the economic development agenda.

Ghana's oil is the light sweet crude (similar to Nigeria's crude) that is much sought after in the international market. The Jubilee Field projected to produce an initial 55,000 barrels of oil per day, but with the development of more wells, production is expected to hit 120,000 barrels per day.

According to the operators of the field, the first export would be in the first week of January 2011, to the United States of America and other European countries, with the rest being used for domestic purposes.

Ghana was the world's latest oil producer, pumping crude for the first time from an offshore field in the Gulf of Guinea.

It recorded history on December 14, 2010, when President John Evans Atta Mills turned the valve on the FPSO Kwame Nkrumah to signify the beginning of the production of crude oil in commercial quantities in the Jubilee oil field.

It was a memorable occasion for all Ghanaians many who stayed glued to their television sets at home and work places to watch the programme live. The function took place at the Takoradi Air Force base and was graced by two former Presidents, Jerry John Rawlings and John Agyekum Kufuor as well as Ministers of State, members of the diplomatic corps, Members of Parliament, traditional chiefs and Ghanaians from all walks of life.

Also present were the Jubilee partners- Tullow Oil Plc, Anadarko, EO Group, Cosmos, Sabre and GNPC, which are the shareholders of the Jubilee Field.?? At about 10am, President Mills arrived on the FPSO in a helicopter and went through the safety briefing before being led by a Tullow official to the pipeline where he turned open the valve to open the pipes for the crude oil to gush through.

Mills, after turning open the valve, went ahead to interact with some Ghanaian engineers and doctors working in the vessel. Dr. Claudia Donkor and trainee engineers Emmanuel Kojo Dei and Francis Antwi were part of those the President interacted with. They expressed their joy at being part of the historic occasion.

Addressing a large gathering at the Takoradi Air Force base, Mills paid glowing tributes to former Presidents Rawlings and Kufuor for their immense contributions towards the production of crude oil in commercial quantities in Ghana.

He said: Rawlings 'clearly laid a massive foundation for what we are witnessing today. President John Agyekum Kufour continued from where President Rawlings left off. He also devoted attention to the oil.'?

The President also paid special homage to former GNPC boss, Tsatsu Tsikata under whose watch great strides were made towards the discovery of crude oil in commercial quantities in Ghana.

He also applauded the efforts of the Jubilee partners in concluding Ghana's odyssey to crude oil production in commercial quantities but reminded them on the need to respect all the agreements signed especially the fact that local content in the production process must be a priority.

Touching on the concerns raised by Chiefs in the Western Region about the need to use 10 per cent of the oil revenue to develop the region, the President assured them that the region would be given priority.

With production beginning, Ghanaians are hoping that the under development that has been the lot of the country for years would soon be a thing of the past.