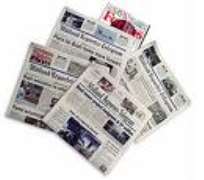 By Wahab Oba
Gentlemen of the press, it becomes expedient to invite you for this press briefing, even at a vey short notice, to address issues that border on the welfare of members, especially our colleague in the Daily Times of Nigeria Plc.

You will all recall that in June, 2008, the leadership of the Lagos State Council of the Nigeria Union of Journalists (NUJ) led its members to the National Assembly to protest the non-payment of the salaries and entitlements of workers who have served in the company since Anosike's Folio Communications bought over the Daily Times from the BPE.

During the protest at the National Assembly Complex, Abuja, the leadership of the Senate intervened, and assured our members that urgent steps would be taken to resolve the issue.

With the intervention of the Senate leadership and other well-meaning Nigerians, we called off the protest and allowed the launching of the 1st October edition of the DTN which the company has been using to milk Nigerians . We had hope that Mr. Fidelis Anosike might for once honour his agreement with the Union. Although he paid N10 million out of the total arrears owed only a section of the workers then, followed by an undertaking he signed with the Union to pay the balance before the end of 2008. Sadly enough, the fulfillment of that undertaking has remained a mirage till date and he seems to have consigned to the dust-bin his indebtedness to workers who served in other departments of the company.

To us this behaviour, unbecoming of a man who is suppose to project the country's image through the publication of the 1st October edition of the DTN, amounts to deceit and trickery as he keeps sourcing for new staff only to frustrate them out after a while. Since then several MDs have hired and fired; several unsuspecting but highly skilled workers have been tricked in to taking up appointments with hopes dashed and promises failed. Those currently engaged have little or no hope for a better tomorrow.

Several letters written to Mr. Anosike, owner of Folio Communications Ltd by the Union to fulfill his promise have been rebuffed while members of our Union and others who worked for him continue to wallow in abject poverty.

This unpleasant experience has brought irreparable losses to the families of those who worked with Folio Communications Limited since 2004; and we doubt if the Federal Government intended to subject its citizens to such harrowing experience when it divested its shares in the Daily Times to a private investor.

Some of our members have suffered disgrace and humiliation from their dependants, landlords and neighbours as a result of their inability to meet their basic obligations while some have lost their lives.

The Lagos State Council of the Nigeria Union of Journalists (NUJ)

Commends the Federal Government of Nigeria, and especially the privatisation committee under the headship of the Vice President, Goodluck Jonathan, for the revocation of the sale of NITEL Plc, and the leadership of the National Assembly for providing the legal framework for the revocation. That singular action, among others, by government has no doubt reassured Nigerians of government's commitment to people's genuine wishes and aspirations. It has also rekindled hopes of better days ahead and the renewed belief that public property will not be sold to dishonest and fraudulent people.

For us in the NUJ, as well as other Nigerians, that decision is not only laudable, but one of those historic landmarks made so far by the government and the National Assembly.

We however appeal to government and the Assembly to kindly employ the same action taken over the sale of NITEL to ensure the immediate revocation of the sale of Daily Times of Nigeria Plc to Folio Communications, the core investor in the company, on the bases of its inability to turn around the company since 2004, culminating in accumulated salary arrears owed to workers since it took over that edifice which for generations stood as a national pride. As at today, Daily Times of Nigeria Plc is indebted to the tune of over N60m to its workers. This is inclusive of arrears which the receiver/manager under Chief Anthony Idigbe (SAN) incurred during his tenure.

It may please government and the Senate to note that since Mr. Fidelis Anosike took over the running of the Daily Times, he has embarked on indiscriminate sale of its property, especially the Nigerian Stock Exchange House in Lagos, the Enugu Ware House, Ashogban Estate, Adeniyi Jones in Lagos, the company's web-off set printing machine and the company's property in London among others. Any property of Daily Times of Nigeria plc, not yet outrightly sold, has been mortgaged to banks for huge sums of money as loans. This action, no doubt confirms our apprehension that Folio Communications Plc has no interest in the running of the Daily Times of Nigeria Plc, but rather, its interest is in the company's property valued to be more than double the price at which Mr. Fidelis Anosike's Folio Communications bought it.


We are therefore appealing to government to immediately revoke the sale of Daily Times of Nigeria Plc. We also want to inform government and the leadership of the Senate that Folio communications Plc wants to get away with all these breaches as BPE's oversight function contained in the purchase agreement issued to it will expire on June 24, 2009, after which government might be handicapped in reversing that sale.

It would be recalled that in 2004, the Federal Government through its privatization policy divested its share holding in the Daily Times of Nigeria Plc to Folio Communications as the company's new core investor.

Ever since, Journalists and indeed all the workers, who have had to work in Daily Times of Nigeria, have done so with pain, difficulty, and misery as a result of the unwillingness of the core investor to meet its obligations to its employees.

Ironically, five years after the take over of the Company by Folio, the reason for the sale of this national pride does not seem any where near its realization.

Many Nigerians have described the sale of DTN to Folio Communication as a round peg in a square hole.

We appeal to government and the leadership of the National Assembly to kindly intervene expeditiously to save the Daily Times from extinction, as well as save the souls of workers whose labour were exploited by Mr. Fidelis Anosike from perishing.

We shall remain ever grateful.