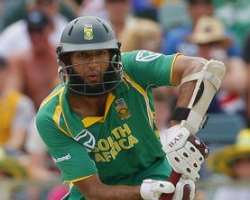 Graeme Smith's early wickets of six and Alviro Petersen's 21 saw the hosts reduced to 34 for two under gloomy skies in Cape Town. But Amla, who started slowly, picked up after lunch to hit 59 from 80 balls before he was out.

Jacques Kallis (22 not out) and AB de Villiers (14 not out) then ensured that South Africa was still in a solid position despite several rain interruptions in what was a decisive match with the series poised at 1-1.

India's captain, Mahendra Singh Dhoni, won the toss and put South Africa into bat, with Gautam Gambhir returning from injury in place of Murali Vijay, while the home side stuck with the same XI for the third time in the series. There was plenty of seam movement for opening bowlers Zaheer Khan and Sreesanth during the early exchanges and the former was rewarded in the seventh over with the wicket of Smith.

The home captain has struggled against Zaheer and was again dismissed lbw, the 11th time he has been out to the left-arm paceman in 23 international innings. Fifteen deliveries later, the umpires called for the covers after the drizzle became heavier, with South Africa on 21 for one forcing an early lunch.

Play was delayed for a further 35 minutes after the break and once it resumed Ishant Sharma lured Petersen into a loose drive, which he edged behind to Dhoni. Kallis and Amla took the South Africans past 50 in the 19th over, but bad light and more rain prompted another 30 minutes break with the score on 61 for two.

On resumption, Kallis and Amla reached their 50 partnership from just 70 deliveries before Amla reached his 19th Test half-century in some style, pulling Sreesanth between two men on the square-leg boundary for six.

But the same bowler then had his revenge when Amla went for one shot too many and was caught by Cheteshwar Pujara at deep mid-wicket.