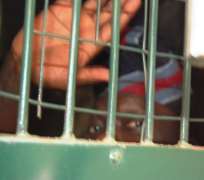 Folarin who arrived the court premises at about 10.30 am will remain in prison for at least the next ten days.

Senator Folarin was arraigned this morning inside an Ibadan Magistrate Court by the Oyo State Police Command after his interrogation for several hours yesterday.

Chief Magistrate Sakirat Baderu ordered that the senator and co-accused be remanded in Agodi Prison after his lawyer, Mr. Rotimi Akeredolu, SAN argued that the court lacked the jurisdiction to hear the matter.

The court thereafter adjourned till January 14, 2011.

Senator Folarin and his co-accused were driven off to prison in a caged Nigerian Prisons Services Toyota pickup van.