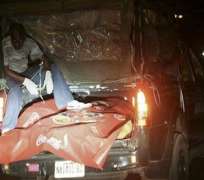 Obama also condemned a terrorist attack in a church in Alexandria, Egypt, which reportedly killed 21 Christians and wounded dozens from both Christian and Muslim communities. He also offered to assist the Egyptian government.

According to a White House statement today obtained by THEWILL, Obama said:

“I strongly condemn the separate and outrageous terrorist bombing attacks in Egypt and Nigeria. The attack on a church in Alexandria, Egypt caused 21 reported deaths and dozens of injured from both the Christian and Muslim communities. The perpetrators of this attack were clearly targeting Christian worshipers, and have no respect for human life and dignity. They must be brought to justice for this barbaric and heinous act. We are continuing to gather information regarding this terrible event, and are prepared to offer any necessary assistance to the Government of Egypt in responding to it.

“The attack near an army barracks in Abuja also reportedly killed more than 20 people and wounded many more. Killing innocent civilians who were simply gathering – like so many people around the world – to celebrate the beginning of a New Year further demonstrates the bankrupt vision of those who carry out these attacks, and we are similarly prepared to offer assistance to the Government of Nigeria as it works to bring the perpetrators to justice.

“The United States extends its deepest condolences to the families of those killed and to the wounded in both of these attacks, and we stand with the Nigerian and Egyptian people at this difficult time.”