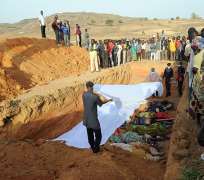 Christmas period is usually a very festive season anywhere in the World. However, in the last two years, terrorists both locally and internationally have made the occasion anything but festive for Nigerians. In 2009 precisely on December 25th, a Nigerian by name Umaru Farouk Al- Mutallab, one of the sons of the wealthy Nigerian technocrat and a very refined and fine gentleman Alhaji Abdul Mutallab, was apprehended in the United States of America for allegedly attempting to bomb an American-bound airliner purportedly on a suicide mission from the internationally dreaded terrorists group in Yemen. That young boy who was schooled in some of the best schools in the United Kingdom is currently languishing in one of the high security prison facilities in the United States awaiting his trial on several count charges.

Last Christmas Eve that is precisely two weeks ago, some evil intentioned local terrorists detonated some powerful bombs in a bridge adjacent a Catholic Church in the volatile capital of Plateau State-Jos. At the last count, over ten dozen human beings have perished as a consequence of the powerful bombs that exploded in Jos and unfortunately the greater percentage of the casualties were women and children who were being driven to Church for one of the finest Masses in the Catholic calendar which marks the symbolic birth of our Lord and Saviour JESUS CHRIST. Seven days after the unfortunate incident in Jos, another set of bombs exploded in the Mogadishu Military Barracks in the nation’s federal capital infact just some few metres away from the seat of Presidential power-the Aso Rock Presidential buildings.

The bomb explosions in Abuja happened exactly three months after the twin powerful bomb explosions which occurred near the Eagle square venue of the fiftieth year Independence anniversary during which several high profile international guests including close to two dozen foreign heads of State were gracing the event at the pleasure and invitation of the Nigerian government.

Needless to explain that the twin bomb blasts of October 1st 2010 killed more than three dozen persons most of whom were celebrants who turned up for the epochal event at which over N10 Billion of tax payers’ money were wasted to fund the celebrations. Just like what transpired immediately following the unfortunate October 1st 2010 bomb explosions in Abuja, a lot of government dignitaries are beginning to troop into some selected hospitals to catch photo opportunities with the media while pretending to be visiting the wounded victims of the recent bomb explosions in both Jos and Abuja and several promises have been dished out both from the Presidency and the military authorities to arrest the culprits and ensure that they are punished for these dastardly crimes against humanity. But a lot of Nigerians have already lost faith in the ability and capability of the current set of political and military leaders to arrest the real perpetrators of these gruesome mass murders that took place in Jos and Abuja.

To most Nigerians what matters is not how loud President Jonathan shouts out his government’s resolve to arrest the perpetrators but how well the threats are meticulously executed and the real culprits arrested and successfully prosecuted in the competent court of law and punished appropriately for these heinous crimes that they have unleashed on humanity by way of bomb blasts targeted at innocent and harmless civilians. What cowardice? What treachery? What impudence to the sacredness of life?

President Jonathan was reported to have stated that the bombs that were thrown in Jos had same origin with those that were thrown in the military beer parlour in Abuja and that the twin bombs that were detonated near Eagle square on October 1st 2010 certainly has Niger Delta origin. What sort of comedy is the President of Nigeria playing with the serious issue of terrorism that threatens the stability of the Federal Republic of Nigeria? Why should the President of Nigeria now play the role of a bomb analyst while his citizens perish rather than act as the true Commander-in-Chief of the Armed Forces by directing the field commanders to ensure that fool -proof and effective measures are adopted to forestall reoccurrence of such dastardly criminal acts and also track down the real culprits so that they will face the full music in the competent courts of law?

For God’s sake, may I appeal to our dear President, Dr. Good Luck Jonathan to stop this ‘April Fool’ joke concerning the ugly bomb explosions’ incidents and take necessary and effective action to restore some semblance of security to the lives and property of Nigerians. To the unrepentant terrorists who have decided to keep throwing bombs to innocent Nigerians with concomitant destruction of lives and property, I have only one word-REPENT or PERISH when caught. What kind of ideological fight are these terrorists waging against innocent Nigerians? If the crises in Jos are all about ownership of land in the Plateau state capital, how can the bomb explosions and the killings of innocent Nigerians confer advantage on the bombers and their sponsors?

Enough of these unnecessary bloodsheds and it is time for the Federal and state Governments to revive the departments of civic education and the National Orientation Agency so that Nigerians will be sufficiently enlightened on the futility of resorting to the use of violence to achieve their goals. If the National Orientation Agency is staffed by competent persons to educate and enlighten Nigerians in their various mother tongues that violence does not pay, then I think the spate of violence will be put under effective check. President Jonathan also has to look at the serious issue of poverty and unemployment because if jobs and better living conditions are provided for the large group of unemployed youths across the country then it will be difficult if not downright impossible for them to be recruited as easy tools for the unleashing of violence on Nigerians. My recommendations for ending these intermittent violence is for the Federal Government to reorganize the security community in Nigeria and ensure that the operatives are sufficiently equipped with the needed intelligence to become one step ahead of the men of the underworld who plot these violent bloodsheds all across Nigeria. Secondly, the Federal Government must reorganize the National Poverty Eradication Programme by appointing the right kind of persons to head the outfit and it should immediately commence what I may call ‘OPERATION STOP POVERTY NOW’.