PLAYING THE BAD BOY IN MOVIES IS CHALLENGING,-- FEMI BRANCH 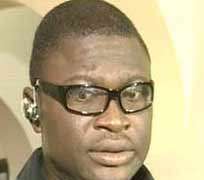 From featuring in a MTN advert, he rose to become a Nollywood star. Until that advert, Femi Branch was unknown. But when he played the nasty role of Oscar in the now rested Soap Domino, fame came his way.
He spoke to Showtime Celebrity over the week and this is how he began his story. Enjoy it.

What's in a name?

I'm Femi and my family name is Osunkoya. But right now, the name Branch is what we should be talking about.

The fact is, I had a problem with the name Osunkoya right from my cradle. My believe then and now is there is nothing worthy in the name Osun which my family had over the years clung to.

I had in mind that whenever God gives me the opportunity, I'll change that name. So when I thought, I was old enough to do that, I turned my second name to Branch.

Nollywood star, Femi BranchI believe that since every name has its spiritual influences, it was better for me to change my name to something meaningful. So I adopted the name Branch from the Bible, which describes Jesus Christ as a faithful Branch.

So that's how the name Branch came to be. Right I'm the only one. I have adopted the name and I have legalised with documents all reflecting it.

Professor Ola Rotimi introduced me into acting. He took me under his wings and I remember him saying to me “Young man, I think you have a future in this entertainment industry.” He took special interest in me and really gave me the footing, the strength that I have in everything I do today. And since then, it's been fun.

Getting into the movie industry

My getting involved first with the Yoruba industry was a matter of when available became preferable. Besides I get called more for Yoruba films than in English movies.

It's a job that you are called for and it does not have its own particular way of doing it. Are you saying that those who play armed robbers' role, should also have been armed robbers before they are picked? No. It's his job and we should be able to differentiate the job from the man himself.

So what you see as Oscar or whatever role I play is the job. It is the role I play and it does not in any way represent who I am.

The Domino story was about the Lord William's family and it's what is happening in our society today. It's the story of a rich man whom God gave children but the problem he faced was the way he is going to cater for his family. And the greatest sacrifice any man could make is seeking success and wealth while his family bears the risk.

Lord Williams faced that problem when he was raising his family, he didn't really have the time to nurture those children which resulted in a broken home.

Somebody like Jerry who played my junior brother, was able to break away without being affected but somebody like Oscar, grew up with a lot of bitterness. His number one bitterness was that although his parents were separated he loved both of them.

His father was his role model, he loved the man, far from what people thought. But from the day, he knew that his both parents were separated, he picked up a quarrel with his father and that was the beginning of hassle between father and son.

At a time, the father could not understand what the problem of this young man was but he had failed to realise that all what his son (Oscar) was doing was a reflection of his youthful days. All the things that Oscar was doing with the business were actually as a result of what his father had taught him when he was growing up.

Lord William's belief was that, for a successful man to get to the top, everything must be put in place regardless of his family. But before he (Williams) realised that things don't work that way, lots of havoc had been committed.

He tried his best to change Oscar's orientation but all to no avail. And the fact that Oscar did not have a settled home was as a backlash of his father's unsettled home.

Getting a role in Domino

I felt challenged the first time I was handed a script. I took my time and studied the character. I felt that this was something I would like to take up. I need to let you know that many people run away from playing bad boy roles.

For me, taking it up was my conclusion that our society is not an ideal one. Where good people dwell, there you find the bad people too. And if everybody wants to play the good role, who is going to play the bad one?

It's easier playing the good man than the bad because one is ready to take a lot of yabis when playing the bad guy. After studying the character, I was able to really identify with the character (Oscar) because I understood it. The first thing l did, was understood Oscar's problem and the rest was easy.

In the end I ended up trying to make people believe that Oscar was just a misunderstood young man.

A lot of persons find it difficult to differentiate the actor from his role in a movie. At times, I may be passing through a particular place and someone from nowhere latches on me and say, “this man why should you be treating your wife like that, you are a wicked man.”

There was a time a guy just blocked me and said, “men anytime I see you, I feel like I should hit you in the eyes.” So when I saw that the man was very serious, I was forced to say, “no be me o, na the character,” then the man said, “it doesn't matter, at least, na you dey the film.”

The experience has been funny because people find it very hard to separate the actor from the role, even till today. Apart from that, it was fun playing Oscar.

Nigerian movies and the rest of the world . . . Everybody wants to be an actor. The prostitute on the street, area boys etc. always find their way into the movie industry.

But the only place you don't find these people are in NANTAP, because it consists of professionally trained theatre artists.

I'm not saying that these people are not relevant but what I'm trying to say is that we should look for how to train them, so that they can be well equipped for the profession they have chosen to belong.
Well, it is very simple.

Hollywood is a phenomenon that has been in existence for a while and they have not stopped growing. Every blessed day, they are thinking of new ways to improve their act, new innovation, new techniques, they are growing every day.

Nollywood is an industry that hasn't been around for as long as Hollywood. There is nothing wrong in that because technologically speaking, we cannot be rated with the Americans, as our nation cannot rate itself with America.

And as such, we can't be blamed for that but it's better to realise that we can make something out of nothing. My believe is that we need to concentrate more on research work, develop new techniques, and pay more attention to training, workshop and organising seminars.

Our movie rating today is purely on quantity not quality. Most of our films still cannot be shown in some film festivals in this world. It's funny that most of our films, still need to be subtitled in English.

Na enjoyment now. But at any rate, I would blame the ladies more because the man who asks you out has the right to do so. There is nothing wrong in asking. But if you know, you are talented, then show your skill. And as for those who believe that if they don't do that they can't move forward, so be it.

All I know is that these people will just use them, and at the end of the day, it's either they don't give them any role at all or they give them one “walker pass” role to play. It's better you discover, package yourself well and don't compromise your value.

If you sleep your way to the top, you must be ready to continue sleeping and if the person says he's tired of sleeping with you, then it's finished. There are ladies that sleep with producers and marketers. And there are producers/ marketers who demand for sex before giving out movie roles but every lady has the choice of saying No. Any lady that says she hasn't got a choice is a liar.

Between man and woman

I'll feel indifferent if a woman should walk up to me and demand for my friendship. It's same thing as a man making the move towards a woman. It's a normal thing and the price one pays for stardom. The thing is that most people don't know how to manage stardom. So confessing your love for a star does not automatically mean that the person wants to jump into bed with you. As for me, I appreciate those who appreciate me.

You know I can't tell you that now. Anyway, the thing that drove me into acting was not the money but the passion for the job. If it was money, a lot of us wouldn't have been in this profession, we probably would be in some other money making professions.

Orirun. And ever since I took part in the movie I've learnt to take every role like acting for the first time. I put in my best to make sense out of nonsense.

I schooled at the Obafemi Awolowo University. I initially got admission to read Religious Studies but later swapped to Theatre Art.

I'm married and blessed with a beautiful daughter, Momoreoluwa.