What my mum told me before I went in for the contest- Akio Ilami, winner, Next Movie Star 2010 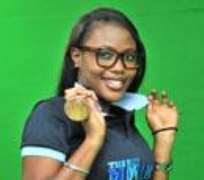 Akio Ilami, a student of English/ Linguistics in the University of Jos, is the winner of Next Movie Star

2010, a popular reality show. This beautiful lady recently spoke with BAYO ADEOYE about her love for acting, dreams and love life, among other interesting issues

What do you think gave you the edge over the other contestants in the Next Movie Star 2010?

First and foremost, I was focused and determined; so, the best thing I did was bring people I thought were a challenge very close to me so as to learn from them instead of praying for their eviction. Despite the fact that it was a competition, I tried to be real. I didn't do anything that would make it seem as if I was too desperate to win. So, I think being real paid off for me.

Did you encounter any life-changing experience in the house?

Hmm! A life-changing experience in the house was the fact that I learnt to live with people from different backgrounds, cultures and religions. In other word, I lived with people from eight different countries across Africa and still tolerated them, which is one of the qualities of a good actress as I learnt in the house. That, for me, is the most profound experience that has changed my life and which I will carry everywhere.

What has changed about you since you won the NMS 2010?

It is not winning really that has changed or impacted on my person; rather, it is being in the house with other equally talented youths from different parts of Africa with their individual idiosyncrasies and characteristics. I have learnt to be a humble person. This has also given me the platform I have always wanted and dreamt about and I am ready to explore the industry with my talent. It has also taught me ways to go about life as an actress. Apart from this, it has really added value to my person.

How did your family members react when you told them you were going to participate in the Next Movie Star 2010?

‎Well, surprisingly, being a disciplinarian and an advocate for education, my mum supported my decision to go into the Next Movie Star House because she knew that it had always been my dream. More so, she looked at the kind of people that had gone through the show and was convinced that it was the perfect platform to realise my acting ambition. I recall my mum saying, “Go and just be yourself and God will be with you. I believe in you and I believe you can do it.” That really touched me as it stuck with me throughout my stay in the house. My mum is so proud of me now; I can't forget the joy she felt and tears she shed when I was declared the winner. She's always been very supportive of me.

Although you have always wanted to be an actress, did you expect that you would be celebrated so early in your career?

To an extent, I will say I strongly believed so because I struggled at this age to get to where I am today. So, even if I didn't emerge the winner but was chosen among 15 other people to be in the house, it was all I needed to get my platform; and with that, I wouldn't have stopped climbing the ladder and getting to where I want to be. For me, this is just the beginning of my evolution as Nigeria's most celebrated actress.

Was there a time during the show that you were scared you weren't going to make it?

No, I was not scared because I have this slogan which I always use: "Never give up,” I don't believe in the word unsuccessful because I believe if you put in your best in what you are good at, you will always come out successful. Fine, there were very strong characters in the house, but I knew I could always hold my own against anybody and that was all the fortification and motivation I needed to stand up to the other guys. For me, I will say I am successful getting to this stage and it's just to put in more efforts to get to where I aspire to be. The sky, I will say, is my starting point (smiles).

For me, I wouldn't call them role models; rather, I will call them people I look up to and want to learn from. They are people like Joke Silva, Genevieve Nnaji, Angelina Jolie and Tonto Dikeh.

How is your boyfriend taking your new-found success?

Boyfriend? I am a young girl of 20 and I believe I still have more interesting years for a relationship. For now, my lovers are my parents and sibling and they are taking my success in good strides.

In five years, I see myself as already being an ambassador for youths, a role model for others and a standard actress that people will look up to and look forward to seeing good jobs from.

What will you do if your boyfriend asks you to stop acting?

As I said earlier, that's still sometime from now. My focus now is my education and career; so, when I get to that stage, I am sure I will meet someone who will love me for whom I am and not what I do; a man who will be proud of my achievements and love me enough to want to live with me for the rest of his life.

I don't think I will like to change anything about myself because this is me and I love me the way I am. I am grateful to God for this. But the only thing I will like to do about me is put in more efforts in everything I want to achieve and do my best to get the best.

How sexually active are you?

I am just 20; maybe if you ask me this question in five years' time, I will be able to give you an appropriate answer. Thank you for your time.

Do you mean you are still a virgin?

Yes, I am a virgin; I have never experienced sex before.

Could you tell me briefly about yourself?