POLITICIANS AND THREATS TO DEMOCRACY 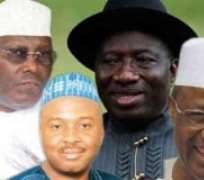 AGAINST the backdrop of the April 2011 general elections that hold so much promise for political advancement in the country, it is rather curious that politicians are demonstrating a lack of capacity, but instead are showing preference for divisive comments that threaten the democratic process and the sovereignty of the nation. Politicians generally need to be reminded that no negative statement or action that is likely to inflict violence on the people or torpedo the political process is welcome. Inflammatory comments, probably arising from selfish interests, undoubtedly pose a great threat to peace and national stability.

Any call to arms, in whichever way it is communicated, or the intent, is damaging and should be strongly condemned. Violence at any point, whether at the primaries or the actual polls, will, as they say, be an ill wind that blows no good. It would always beget further mayhem to the detriment of the current democratic dispensation.

Therefore, in consideration of the collective interests of the people, we find the recent passionate outburst of PDP presidential aspirant Alhaji Atiku Abubakar very unnecessary if the country would make a clean break from the infamous past. The most prominent of the incisive remarks was credited to Atiku, (former vice-president, presidential aspirant on the platform of the Peoples Democratic Party and a consensus candidate of the North for the 2011 polls) who spoke at a national stakeholders' conference organized by the Northern Political Leaders Forum (NPLF), Igbo Political Forum, South-South Unity Forum and the Yoruba Redemption Group in the build up to the PDP primaries next January 13.

Borrowing from the famous words of Frantz Fanon, Atiku reportedly took a swipe at the present political leadership in the country as he warned, 'those who make peaceful change impossible, make violent change inevitable.' Many other political heavyweights spoke at the session that was held essentially to underscore the essence of the contentious zoning arrangement in the PDP, but most of the other commentators were careful in their choice of words. For instance, former military President Ibrahim Babangida was somewhat discreet, saying, 'Any attempt to disrupt the arrangement therefore portends ominous prospects to the electoral fortunes of the party, but more seriously endangers political transition in the nation.'

A piqued President Goodluck Jonathan, himself an aspirant on the party's banner, besides his justified response as the president stressing the nation's superiority over individuals, would not let go the chance to send broadsides against Atiku's 'culture of careless and inciting utterances'. As Jonathan spoke, incidentally, the State Security Service (SSS) spokesperson, Marylin Ogar also said the service noted with grave concern that 'the unguarded, reckless and divisive' comment, apart from being 'inflammatory and extremely inciting are of deep and grave national security concern'.

Other implications are that the general election is so close - barely three and a half months away - and any attempt to truncate it would be an assault on the popular will. Besides, the country's leadership has gone to great lengths to draw on the goodwill of the international community in the past months and is not likely to squander the opportunity of the country staying peaceful while also enjoying its newfound rating and consolidating on her successes at the regional, continental and global levels.

It is therefore quite disturbing that a contest for a party ticket for the purpose of serving the people is being turned into a do-or-die affair. But that exactly is what the whole mess is turning into: a desperate agitation for political power at every level. In short, threats of violence cast serious doubts on politicians' claim to service. Regrettably, the attractions of office are simply too irresistible, and this is unhealthy for the country's development.

Atiku would therefore do well to clarify to the public, his position on the impossibility of peaceful change. From all indications, there has been no sign of any obstruction to peaceful change in the polity. In that wise, politicians must learn to be accommodating of one another and promote peace and stability. The people, heavily burdened with a load of socio-political and economic problems, are desirous of a fresh breath that can only be provided by committed and selfless, vision-driven men of ideas. To deny them of these particularly in an atmosphere devoid of peace would be criminal and highly unacceptable.

Fortunately, Atiku's credentials in public service and business, especially his tenure as vice-president for eight years in this same democracy portray him as a responsible politician who would not rock the boat, no matter the odds. As a man who dearly upholds the rule of law with landmark law suits and the judgments he got from the court to insist on the supremacy of due process, he could afford to do more where violence would do less.

The Turaki Adamawa did so much to correct political ills that would have been fostered on the country through a civilian dictatorship. He cannot afford to change from being an apostle of peace, order and legality. We do not expect a man of his stature and political experience to give any room for doubts through unguarded statements. So far, even in the current campaigns, he has shown capability for issue-based politics to allow anything or any comment to derail his goals or vision, on ethnic grounds or a supposed party arrangement.

In general, we advise all politicians to rise above pettiness and riotous claims in their campaigns. Only politics of issues, maturity and patriotism should be acceptable to the delegates at party primaries. Politicians should be reminded that the people's interest is far more paramount in any given situation.