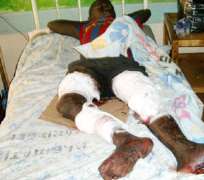 JOS— THERE was palpable tension in the Plateau State capital, yesterday, as angry youths carried out reprisal attacks in some parts of Jos setting houses ablaze and molesting people over the Christmas eve blasts in two locations which claimed 32 lives and hospitalisation of 74 others.

One of the victims of the Jos blasts receiving treatment at the Evangel Hospital, in Jos, Plateau State, yesterday.

The spirited efforts of a combined team of soldiers and policemen, however, saved the situation from getting out of hand as they quelled attempts by groups of youths to take on themselves at Tinna Junction and Abattoir area.

Four additional units of anti-riot policemen have been deployed to reinforce security in the state following the outbreak of pockets of violence.

Briefing newsmen, yesterday, DIG Audu, said the additional units of policemen were deployed from Bauchi, Benue, Gombe and Kano States to complement efforts of those on ground.

Audu who confirmed that there were pockets of violence in some parts noted, however, that they had been brought under control. He also assured of the preparedness of the police to contain any further violence.

The Vice President was scheduled to fly to Jos to carry out on_the_spot assessment of the extent of damage to human lives and property.

Senior Special Assistant to the Vice President on Media and Publicity, Alhaji Umar Sani, said the proposed trip has to be put off due to the mounting tension and volatile situation in  the state.

Vanguard was told that the Vice President would still make the journey but certainly at a later date, perhaps during the week.

The Vice President's media aide who confirmed the postponement would not give further reasons but noted that the federal government was on top of the situation in the once tourists_heaven city of Jos.

Sani said, 'all I can tell you is that the Presidency is doing everything possible to restore order in Jos and the Vice President is likely to leave for Jos within the week'.

President Goodluck Jonathan  had on Saturday assured of  Federal Government's resolve to take all necessary action to ensure that those responsible for Friday's blasts are brought to justice.

Vanguard gathered that the sudden but indefinite postponement of the Vice President's all_important sympathy visit may be the height of insecurity in Jos, where communal  fighting has been the order of the day for the most part of this year.

Lar describes blasts as work of enemies
Reacting to the bomb explosions, former PDP National Chairman, Chief Solomon Lar, described them as the handiwork of enemies of the state.

Lar said in a statement yesterday:  'It is a great pity that the most important Christian festival, proclaiming peace on earth, was disrupted by retrogressive elements who do not cherish peace, or value human lives. This is least expected in the city of Jos after all that has been done to restore peace to the state.

'I sympathize with relations of those that lost their lives, that God will comfort them and grant them the grace to bear the irreparable loss. For those that sustained injuries, I pray earnestly that they will recover fully to normal life in due course.'

While urging the people to remain calm and vigilant, he called on government to 'investigate the incidents and bring to book those found to be behind the murderous acts. The government should also be on its toes to restore security and confidence in the people.'

Similarly, Secretary General of Jama'atu Nasir Islam in the state, Alhaji Alhassan Shuaibu has also condemned the violence urging the people, especially Christians, to be calm and cooperate with security agencies in getting to the root of the matter. He stressed the importance of peaceful co-existence among Muslims and Christians since the various religions preach peace.

FCT minister beefs up security
Worried by the reprisal attacks in Jos, Minister of the Federal Capital Territory Administration, FCTA, Senator Bala Mohammed has beefed up security in the nation's capital territory. He said the move became imperative to forestall a spill over effect of the ugly incident.

Speaking with newsmen in Abuja, yesterday, the Minister said that the nation's capital has never rested on its oars on the issue of security, just as he disclosed that an additional 1000 informants had been deployed in different parts of the FCT while the Police and other security outfits have stepped up their surveillance over the territory.

While describing FCT residents as very peaceful and accommodating, he warned all trouble makers to steer clear of Abuja, stressing that nothing would be spared to ensure that FCT preserved its enviable status as the safest spot in the country.

In his reaction, Senate President, Senator David Mark, condemned the Christmas eve blasts in Plateau State describing them as acts of terrorism and un-acceptable.

Senate President Mark who spoke through his Chief Press Secretary, Paul Mumeh, said:  'We condemn the Jos bomb blasts in totality and task security operatives to bring perpetrators to book as we believe there should be no sacred cows because no human life is more important than the other.  We believe this is an act of terrorism and something must be done to save Plateau State to avoid future occurrence of such ugly incidents.'

US govt condemns blasts
Meanwhile, the United States of American government has condemned the crisis in Jos.

The US Ambassador to Nigeria, Ambassador Terence P. McCulley, in a statement in Abuja, called on government to bring perpetrators of the dastardly act to justice.

The statement reads: 'Once again violence has broken out in the town of Jos in north central Nigeria. As U.S. Ambassador, I deplore the continued violence and deeply regret the tragic loss of many lives.  We offer our sympathies to those who have lost their loved ones and friends and to all those forced to live in fear in their homes and neighbourhoods.

' We appreciate the comments made on Saturday by President Jonathan and other Nigerian leaders.  The Nigerian Federal Government, as well as state and local officials, should do all they can to ensure that perpetrators of these violent acts are brought swiftly to justice. At the same time, we trust that Nigerian security officials will exercise appropriate restraint and show respect for human rights as they strive to promote peace, security, and the rule of law.

'All parties should seek constructive means for addressing the continuing cycle of violence. We encourage all parties to seek to resolve their differences through peaceful means and constructive dialogue. While there are no reports of American injuries or deaths, the U.S. Embassy has issued a message advising U.S. citizens in the affected regions to remain vigilant, and we will continue to monitor events in the region.'

Sultan blames bad leadership
The Sultan of Sokoto, Alhaji Saad Muhammadu Abubakar 111, said the recent Jos crisis should be put at the door steps of political leaders, saying the recurrent crisis in Jos has nothing to do with religion.

Speaking with reporters on arrival at the presidential wing of  the Murtala Muhammed Airport, Ikeja, Lagos, the Sultan urged government to unravel why the problem keeps recurring in Jos.

He noted that before the advent of this democratic dispensation the spate of violence in different parts of the country was minimal, affirming that the failure of the government to address the root cause of this problems account for the huge number of lives lost.

Sultan Abubakar said: 'When the whole world is coming together we are busy getting innocent lives being lost, it a very unfortunate circumstance. All the religious and political leaders  have spoken for over a long time and I think we must find a way to put an end to this, let me call it national calamity. It is  not only in Jos where you have such incidence happening, but  why are they happening? We must find out. So I think we blame the political class for getting us to this stage because it was not like this before, but this has gotten bad.'

On why the political leaders should be blamed, the Sultan said: 'Because they are the leaders; if a leadership is good, the followership will be good. The leader should find related problems plaguing the society where we live. We the religious leaders, we are doing our best, in fact we are addressing a press conference on Tuesday with Ayo. It is unfortunate that we have such incidence in the country.'

The sultan who is in Lagos to address the media on the state of the nation with the leadership of  the Christian Association of Nigeria, CAN, asked Nigerians to rally round the government to find a lasting solution to the intractable problem.

'What happened in Port Harcourt, and among the Ogonis, it is not religious; whenever a Christian is involved in any fracas they will say it is religious. I think the earlier journalists stop painting such issues as religious, I think the better for us.'

On the alleged failure of intelligence gathering by security agencies, he said: ' That is why I say the fault still revolves around leadership.'