STEPPING UP IN WHITE 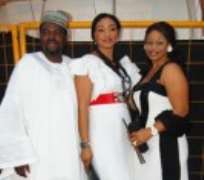 Now in its fourth edition, the event, which held at the Darlington Hall, Ilupeju, Lagos, turned out to be a gathering of the country's showbiz personalities, not minding that the MTV Africa Music Award (MAMA) was held the previous night.

Surprisingly, most celebrities sighted at the Eko Hotel, venue of the MAMAs, were also present at The White Gig in their outfits, digging it to the sound of the music.

For those familiar with the soft sell magazine, they don't joke with dress codes. From the Black and White Ball to the Green and White Party, they have always insisted on strict adherence to dress codes. Little wonder some guests, who showed up in other choice colours than white, were denied access.

With the slogan, Step Up Your Game, the party was aimed at encouraging Nigerians to be professional, adopt the best business practices and live their dreams. It was a night of fun, entertainment and networking.