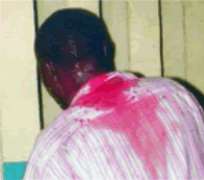 Enilari after he was battered
Almost two years after the alleged brutal beating of their breadwinner by military men, which resulted in his death, the family of Olajide Enilari is still battling for justice.

The 49-year-old father of four was allegedly battered to death by two soldiers on January 29, 2009. The family wants the men to face the deserved punishment.

The aggrieved family members have filed a suit against the Chief of Army Staff; the Nigerian Army; Chief of Naval Staff; Nigerian Navy; Attorney General of the Federation; Commandant of the Nigerian Army School of Finance and Administration as well as the officers alleged to be involved in the crime, Friday Ameh and Nimmack Nappon.

They are asking the court to order the defendants to pay N50million as compensation for the emotional, financial and physical trauma the family went through. Wife of the deceased, Afusat and his 81-year-old mother, Madam Suniat along with the four children – Wunmi (24), Sunkanmi (18), Olabisi (17) and Abimbola (13) instituted the suit.

In the suit filed before a Federal High Court in Lagos through their lawyer, Destina Dalumo of the Access to Justice (AJ), the 5th and 6th defendants serving under the 1st - 4th defendants were alleged to have brutally beaten their father, son and husband who was a flour merchant on January 27, 2009, by using an iron rod to hit him on the head. He was said to have died two days later.

According to his wife, the deceased and his truck driver, one Yusuf Alabi had gone to place an order for flour at the Nigeria Flour Mills in Apapa, Lagos. But at 4 o'clock in the evening, the driver rushed home to inform her that her husband had been beaten by two military operatives in Apapa and that their attention was needed at the Area B Police Station Apapa.

'On getting to the police station, we were shocked to see the deceased bleeding profusely as a result of a head injury he had sustained. He also appeared to have been severely physically brutalized and his shirt was soaked with blood from wounds on several parts of his body. 'At the time I saw the deceased at the Apapa Police Station, the deceased was still conscious and he narrated the incident leading to his predicament to me. Narrating the incident, the deceased stated as follows:

'While they were at the bus-stop and wanted to cross to the opposite side of the road to pick a cab, a driver who apparently was in a haste hit and knocked him down, having disregarded directives from the traffic warden who had ordered on-coming vehicles to stop.

'Yusuf Alabi, his driver immediately helped him to his feet, while he (the deceased) shouted at the driver of the vehicle that hit him 'Do you want to kill me?' He said that he was expecting an apology from the men in the car (who are the 5th and 6th defendants herein) which knocked him down, who unknown to him were military operatives. Instead of apologizing, they got down from the car, undid their belts and went after him and his driver. When he discovered they were soldiers and were determined to assault him and his driver, he took to his heels asking his driver to do same.

'Unfortunately, the military men caught up with him and beat him ruthlessly thereafter. Part of what was used to beat him, as deposed to by the wife in the statement of claim, was an iron rod they found lying by the roadside.' He, according to the deponent, bled profusely from his skull following this assault.

'The military men, on sighting blood gushing from his skull, took to their heels, but policemen from Flour Mills post arrested them and took them to Apapa Police Station.

There, they admitted using a rod to hit him on the head and they undertook to take him to a military hospital for treatment; thereafter they wrote statements relating to the incident at the said station,' she stated.

The deceased, the wife further averred, was thereafter taken to a hospital where he obtained medical treatment. But, notwithstanding the treatment, he complained persistently to his wife that he was having pains on his head as a result of the iron rod used on him and was feeling dizzy.

So, at 3am on January 29, 2009, Mrs. Enilari allegedly discovered that her husband had difficulty breathing and she hastily ran to a nurse in the neighborhood for assistance. But before she got back with the nurse, the deceased had died, while blood streams gushed from his nostrils.

'Our lives have been shattered and torn apart. The death of the deceased has caused us severe emotional and psychological trauma individually and collectively, particularly myself who since the death of my husband cannot sleep except by sedatives. My mother-in-law often laments the anguish of being pre-deceased by her son, and she claims she has lost the joy of living,' Afusat lamented.

Therefore, the plaintiffs are asking the court presided over by Justice Muhammed Liman to declare that the assault on the late Olajide Enilari was unlawful, wrong, callous and a gross violation of the deceased's right to life as guaranteed by Section 33 of the 1999 Constitution of Nigeria and Article 4 of the African Charter on Human and Peoples Rights.

They are also asking the court to declare that the failure of the Nigerian Armed Forces to take adequate measures to ensure that the deceased was given proper medical attention from the fatal injury allegedly inflicted on him by Ameh and Nappon is a violation of the deceased's right to life as guaranteed by the 1999 Constitution of Nigeria and the plaintiffs' right to associate with the deceased as guaranteed by the constitution.

They want the court to declare that the death of Mr. Olajide Enilari was a foreseeable result of the violence and brutal assault meted out to him by the 5th and 6th defendants. However, the defendants are yet to appear in court through their lawyers, neither have they filed a statement of defence as a reply against the plaintiffs' claims against them.