NIGERIAN MUSIC INDUSTRY IN'10: THE HIGH AND LOW POINTS 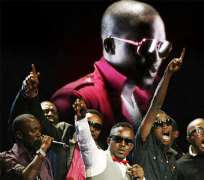 It's amazing how much the music industry has grown since 1993 when the British American Tobacco company, (BATCO) came roaring on the scene with their Golden Tone concerts.

Aside raising the ante, they also came with mouth-watering fees ranging between N800, 000 and N1million which also redefined concerts management and offering 'better life' for musicians, as a critic once put it.

Before then, musicians were on the receiving end in the area of remuneration. Apart from the Fela Anikulapo- Kuti and Majek Fashek who because of their cult followership could dictate to promoters what fees they were to be paid, the highest earning performer receiving a lowly fee of N35,000. Nobody cared if they survived or lived.

The lack of financial muscles also detected the quality of musical videos that were shot during the period.

Such was the pathetic situation the industry wallowed in, that it was almost impossible and unthinkable for new entrants to make ends meet.

The coming of the Golden Tones concerts this writer recollects, seemed to be the tonic the industry needed to awaken from their slumber. The N1million concerts fees they offered musicians provided a platform for some of the well-established ones amongst them to brave the odds and challenge for better remunerations.

Although, the industry suffered a temporary set back with the crisis that followed the annulment of the 1993 Presidential election by former military leader, General Babangida, the industry has since risen above the mediocre level, it had operated in the past.

In the beginning
Signal to what has come to be know today as Naija Hip hop music was flagged off in 1997 by the group Remedies. Released by Sol records the group made up of young men began the revolution of what has today, firmly stamped the country as a power house in music and video production.

The new wake up call came with it, a new awareness to an industry that almost had no identity and was virtually living under foreign musical influences.

No longer was the country ready to take the back seat to countries like Ghana, Congo and South Africa. With the new definition for our genre of  music, the country exploded and Nigerians soon tired out with listening and dancing to 'other' genre of music. It was a total embrace and the industry rose to the new tempo, creating a new generation of super stars.

It soon became unfashionable for Disc Jockeys to spin just any genre of music as Nigerians would not dance to anything outside the Naija circle.

As the quality of  music soared and musicians smiling to the banks, a new generation of daring young and enterprising music video producers who were not only educated in the business but blessed with the ability to interpret lyrics into pictures.

With more locally organised music and video awards coming on board, the quality of  musical videos   soon signalled to the outside world that Nigeria was ready for the challenged and would no longer be push overs.

Today its an acknowledged development that Nigeria holds the ace in the field of music and video productions in Africa. The country dominates in all the categories of awards organised on the African continent.

2010
The country consolidated on the gains of the previous years.  Unlike the home video industry which experienced a lull in production, the Nigerian music retained its number spot on the continent of Africa as the leading entertainment nation.

The evidences and testimonies are there in the number of music video awards held in the country annually. If the music video industry is not thriving, the organisers would be looking  at doing something else for a living.

Although Fally Ipupa took home the Best Video awards for 2010 at the MTV Music Awards for Africa MAMA '10, the result did not in any way reflect the true picture of  today's video production capability of the Nigerian producer.

At the 2010 Channel O video awards held in South Africa, Nigeria led by 2Face bared her fangs when musicians flying her flag, won the overall number of awards.

P-Square, Mo' Cheddah General Pype, D'Banj Sasha and Naeto C shone like the stars they are, winning against all odds.

Also during the year, Nigeria musicians began what may soon signal the total dominance of the African music scene especially in the choreography department.

The collabo videos shot by J. Martins and Fally Ipupa, Freewindz and Awilo Logumba, leaves no one in doubt that some of our Africa brothers and sisters are fast taking to our dance steps. Nigerian dance steps also dominate videos shot by Ghanaians.

Alozie Uzoukwu, Entertainment Editor of Silver Television summed up the situation thus; 'The Nigerian musical video industry has come of age and competes favourable with any production in the world.'

But the only sore point a critic pointed out 'is the growing tendency for Nigerian video producers to adopt South Africa as  location for most videos shot for Nigerian artistes.

This  development is sad and it's killing our tourism industry. Is it that we don't have what it takes to host such video production in Nigeria?

The excuse producers have always given is that ' It is cheaper to shoot in South Africa. The kind of equipment we need to work within Nigeria are either expensive or are not easily available.'

This leaves one wondering if the government of the day isn't worried about the capital flight and the dip in the tourism potentials of the nation.

Music
The music industry has let no one in doubt that it is the future of the nation's economic power if rightly positioned.

Away from the days when only a handful of musicians held sway and enjoyed massive air play, the scene is no longer predictable as emerging new hands have proven equal to the task.

This year, the competition was very keen and this is evident in the concerts' circuit as newer artistes displayed older ones. Names like Mo Cheddah. Dagrin, Ice Prince, Skuuki and General Pype shoved aside older colleagues.

The year also witnessed the emergence of  new producers like Ty Mix, Sossick complimenting the efforts of the older established ones like Eldee, K Solo, Cabassa.

Quarrels and misunderstanding between industry practitioners also played out. The 9ice and the Ruggedman palaver over the alleged role played by the later in the collapse of the former's  marriage were much talked about for months.

The beef between the two, eventually played out in the studios where diss and counter dissing songs were thrown up by the feuding former partners.

Koko master, D'Banj also made his contribution with the release of his controversial video featuring, the diva, Genevieve Nnaji. Tongues waged and are still waging over their rumoured romance.

Perhaps what many considered the high point of the year 2010 was the sack of the former Director General of the Nigerian Copyright Commission, (NCC), Professor Adebambo Adewopo over his alleged role in the copyright brouhaha that left the copyright community in a turmoil.

The MTV  Africa Music Awards (MAMA) returned to Nigeria after a near chaotic outing when it held in Abuja for years ago.

In the course of the year, the music industry  lost a popular fuji musician, Sikiru Ayinde Barrister, aka Alhaji Agba.

Government recognition for the industry
Succour finally came the way of the music industry after one and half decades  of musical excellence when  President Goodluck Jonathan announced a 200million Dollars fund for the entertainment industry.

Although modalities on how the funds would be disbursed were not spelt, the development, many believe may signal the beginning of better things to come in 2011.