HUNGARY CREDIT RATING CUT TO ONE NOTCH ABOVE JUNK 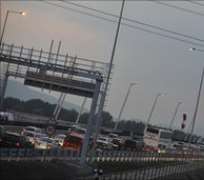 Fitch is concerned about where the Hungarian economy is heading

The ratings agency Fitch has downgraded Hungary's debt to just above junk in the wake of its recent budget.

Fitch said the country's budget plans, which were approved on Thursday afternoon, were ill-considered.

Hungary has been particularly affected by the financial crisis and received a two-year standby loan agreement of 20bn euros ($26bn; £17bn) from the IMF and other lenders in late 2008.

Portugal's credit rating was also downgraded a notch by Fitch on Thursday, from AA-minus to A-plus. Fitch said this was because of a “deteriorating near-term economic outlook”.

Hungary's economy minister said the downgrade was regrettable but not surprising

Fitch has put Hungary's public debt at BBB minus, which is one notch above junk status.

Hungary has promised to pull its budget deficit below 3% of debt next year, but Fitch said it remained concerned about its economic strategy.

Flat tax
Hungary has introduced new levies on foreign-owned businesses, but it has also introduced a flat income tax rate – which will reduce revenue from that source and, unlike most other European countries, it has not cut spending.

It describes the 2013 growth forecast of 5% as “optimistic”.

The other two major ratings agencies, Moody's and Standard & Poor's, also rate the country's creditworthiness at just above junk status.